ST-Line trim gives the Ford EcoSport SUV a sporty look and feel, along with extra kit 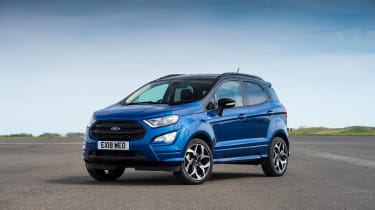 The ST-Line trim level for the Ford EcoSport adds sporty touches to the exterior and interior of the car, as well as a decent amount of extra kit. However, even these welcome changes can’t fundamentally alter a driving experience that is hampered by mediocre handling and some unusual quirks.

The EcoSport sits below the Ford Kuga in Ford’s current range. It goes up against the Nissan Juke and SEAT Arona, which are both offered in sporty trims. The ST-Line model fulfills this role in the EcoSport range, bringing improvements to exterior styling and cabin materials, as well as extra equipment. 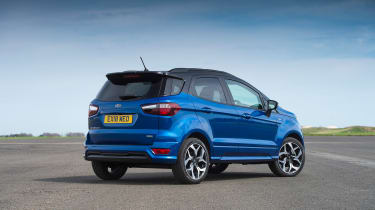 According to the latest WLTP figures, fuel efficiency of 43.5mpg and emissions of 119g/km CO2 should be expected from the 138bhp 1.0-litre EcoBoost that we had on test, so it should be relatively cost-effective to run. It’s worth mentioning that the 123bhp 1.0-litre EcoBoost with automatic gearbox option achieves around 5mpg less than the manual option. The diesel engine in the EcoSport achieves a higher mpg figure on the WLTP tests, between 46-56mpg, depending on the choice of front or four-wheel drive.

The exterior features specific to the ST-Line give the EcoSport a sportier look. They include an larger spoiler, ST-Line bumpers and side skirts, a redesigned front grille, unique headlights and 17-inch alloy wheels. Also included is upgraded sports suspension, in an attempt to improve the handling.

The level of kit is boosted by the addition of parking sensors, a reversing camera, climate and cruise control, sat-nav, Apple CarPlay and Android Auto. There’s also the option to add extra safety kit such as blindspot assist. The lack of AEB is conspicuous, especially when comparing the Ecosport against rival compact crossovers. 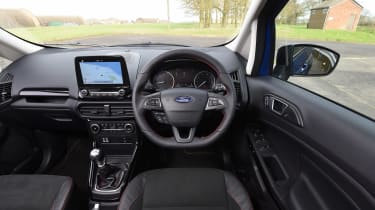 The driving position is high and gives a good view of the road. The dash layout is an improvement over the pre-facelift design but the harsh plastics throughout the cabin detract from the design. The rear seats do offer a reasonable amount of space, even if its not class-leading.

The EcoSport’s boot size of 356 litres is adequate, and the boxy shape means you can make good use of the space. Ford still hasn’t amended the side-hinged tailgate that still opens on the incorrect side for UK owners. 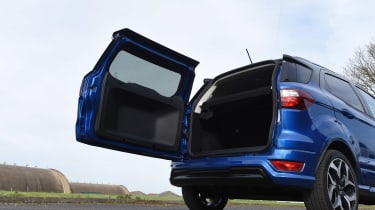 We tested the Ford EcoSport ST-Line equipped with the top-spec 138bhp 1.0-litre petrol EcoBoost engine. Given the expectation created by the ST-Line badging, the lack of sharpness is disappointing. The strongest pull from the engine comes in at around 1,500rpm - it’s acceptable but it doesn’t feel quite like the pulling power quoted. From 0-62mph the car takes 11.8 seconds, which is slow considering the engine’s power.

The steering is responsive enough, which is good around town. Take the car out on the motorway and the ride feels intermittently bouncy and slightly unstable, despite the sports suspension. Also rather distracting is the wind noise coming into the cabin from around the wing mirrors and seals.

Given the subdued initial reaction to the Ford EcoSport, the improvements to the interior and exterior on the latest car are welcome. The ST-Line models enhance the small SUV’s appeal further with a sportier look and feel on the road. Despite the positive changes, Ford still isn’t keeping up with competitors in this competitive area of the market. The EcoSport has below-par ride quality and some quirks in driving dynamics. There are definitely worthy alternatives that offer more for your money.