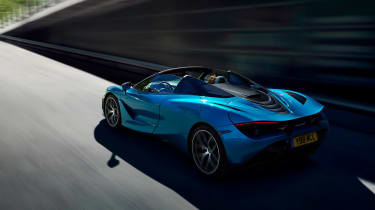 Fans of open-top supercars will be pleased to hear the McLaren 720S Spider is set to arrive in March 2019. With a price of £237,000, it features a lightweight roof that can open and shut in 11 seconds and stay open at up to 202mph - just 10mph below its top speed with the roof up.

McLaren is particularly proud of the Spider's low weight, made possible by its carbon fibre Monocage II body structure; it’s so stiff that removing the roof doesn't require the typical extra bracing elsewhere. Weighing 1,332kg, the McLaren is 88kg lighter than the Ferrari 488 Spider, its closest rival, and only 49kg heavier than the 720S Coupe. 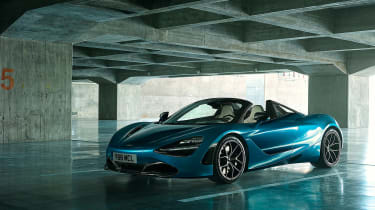 The 720S Spider’s roof can be operated at speeds of up to 31mph and ordered with a glass panel that can quickly switch from transparent to opaque thanks to electrochromic technology. It's also said to be twice as quiet in operation as the roof systems in McLaren's earlier convertibles. There are 58 litres of space found under the tonneau cover with the roof raised.

Adding a striking appearance to its tail, the 720S Spider has unique glazed flying buttress pillars either side of the rear window, improving over-the-shoulder visibility by 12% and boosting the amount of light inside. They also sit 25mm lower than the McLaren 650S Spider, improving air flow and reducing turbulence. 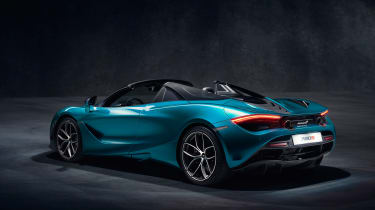 The rear windscreen itself can also be lowered independently of the roof, for those moments when you want more engine sound inside the car, no matter the weather.

The 720S Spider will be available in the same standard, Performance and Luxury trims as the Coupe, with two new colours - Belize Blue and Aztec Gold - added to a list of 23 variations. It will also stand out thanks to a new set of 10-spoke forged alloy wheels developed specifically for the Spider.

The engine is the same twin-turbo 4.0-litre V8 petrol as found in the Coupe. It produces 710bhp and gets the Spider from 0-62mph in 2.9 seconds and from 0-124mph in 7.9 seconds, times that are fractions of a second behind the hardtop. The same hydraulic suspension is carried over too, with comfort, sport or track handling modes for owners to choose between.