Swift Attitude apes looks of the Swift Sport, while costing less to buy and run 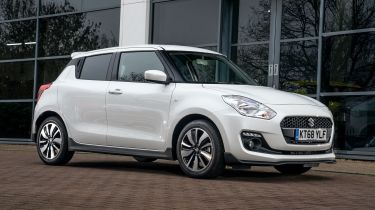 Suzuki has launched the Suzuki Swift Attitude, a new special edition of the Swift with sporty styling but fewer of the associated running costs. Expected to be available until the end of March, it can be picked up for £13,499, undercutting the Ford Fiesta ST Line 1.0-litre EcoBoost by £4,500. Suzuki will hope the car’s low running costs and attractive finance deals appeal to younger buyers.

The special edition equips the supermini with a mesh front grille, chrome trim and front foglights, while a large rear spoiler is the most noticeable addition. The car also features two-tone black and polished 16-inch alloy wheels, and a carbon-effect front spoiler and side skirts.

The Attitude edition of the Swift is inspired by the Swift Sport, and Suzuki suggests the Attitude could form a stepping stone for younger drivers aspiring to hot hatch ownership with more affordable car insurance. Body colours include the solid Fervent Red and optional metallic finishes Pure White, Premium Silver, Super Black, Mineral Grey and Burning Red that all cost £485. 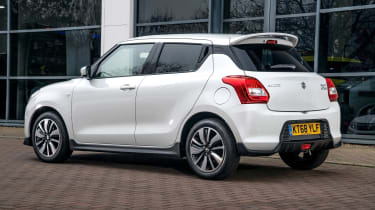 The sole engine is Suzuki's 1.2-litre Dualjet, with 89bhp and a five-speed manual gearbox. It costs £140 a year in road tax and CO2 emissions of 124g/km (WLTP) place it in the 25% Benefit-in-Kind band for company-car drivers. Its official fuel consumption figure is 60.1mpg according to NEDC tests, so a lower figure is likely in day-to-day driving.

Customers can also buy the car on a PCP deal costing from £155 per month (over 48 months with a final payment necessary to keep the car), with a £500 finance contribution from Suzuki and 0% APR.