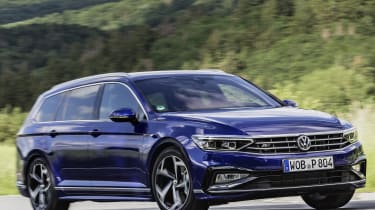 Volkswagen has revealed further details of pricing, engines and specifications for the new ‘Mk 8.5’ Passat. The 148bhp 1.5-litre TSI EVO engine makes its debut in the entry-level Passat in SE trim, priced from £25,370. The updated GTE plug-in hybrid, with an improved electric-only range of 36 miles, starts from £36,390, representing a saving of £1,635 over the outgoing car. It’s available to order now.

A key model for VW, the Passat sells in higher numbers than the BMW 3 Series, Audi A4 or Mercedes C-Class. The estate version is even more important given that twice as many are sold compared with the four-door saloon. The outgoing GTE plug-in hybrid accounted for 10% of Passat sales in the UK but the new one is expected to account for 25%, according to Patrick McGillycuddy, head of sales operations at Volkswagen UK.

From the outside, you might be hard pressed to notice much difference between the outgoing Passat and the facelifted version. Little has changed besides redesigned bumpers and LED lights - now standard across the range - and the addition of three new paint colours. 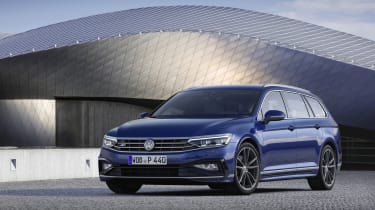 The new Volkswagen Passat is slightly less expensive than the outgoing model. The entry-level model, the SE, is available to order from £25,370 for the saloon and £27,185 for the estate with the 1.5-litre TSI EVO petrol engine. Standard equipment includes LED headlights and daytime running lights, a 6.5-inch infotainment system with Apple CarPlay and Android Auto, 17-inch alloy wheels, plus black roof rails if you choose the estate. SE Nav is £850 extra and brings sat nav.

The stylish and luxurious SEL will cost you from £27,170, a £1,800 premium over the SE spec. It includes leather upholstery, tinted rear windows, a larger eight-inch touchscreen and voice control.

The Passat GTE plug-in hybrid is priced from £36,390 for the saloon and £37,920 for the estate, representing a saving of £1,635 over the outgoing car. Included as standard are 17-inch ‘Nivelle’ alloy wheels, sports suspension, blue brake calipers, distinctive signature ‘C’ shape front LED running lights, a Discover Navigation system with an eight-inch colour screen and a charging point in the radiator grille. The GTE Advance model costs £38,940 and benefits from 18-inch ‘Monterrey’ alloy wheels, IQ.Light LED matrix headlights, Discover Navigation Pro with a 9.2-inch colour screen and keyless entry.

It’s inside where the most obvious changes have been made. Semi-autonomous technology means that, for the first time, the car will offer the latest in cutting-edge convenience systems and driver aids. Choose an automatic gearbox, and it can start and stop in traffic without you lifting a finger. Combine this with a wealth of new safety technology, and the Passat is far more advanced than ever before. The safety assistance available includes emergency steering to swerve out of harm’s way and a lane-keeping aid.

VW’s latest digital dashboard will be available for extra cost, and the Passat can always be online if you choose. With wireless Apple CarPlay and an on-board ‘connectivity unit’, you can enjoy many online features, including live traffic navigation, internet radio reception and a service that allows you to pay for parking on your phone and get parcels delivered to your car. Certain Samsung smartphones can also be used as a key to unlock and start the car.

A new 268bhp petrol engine will be the most powerful engine in the range and will be the only version to feature four-wheel-drive as standard. You will also be able to choose from petrol engines with 148bhp and 187bhp, or diesel engines with outputs of between 118bhp and 237bhp. Both the petrol and diesel engines with 148bhp will be able to shut down half their cylinders when full power isn’t required to save fuel. The GTE hybrid, pairs a 1.4-litre 148bhp petrol engine with an electric motor. The all-new 2.0-litre TDI EVO engine will arrive later with a choice of seven-speed DSG automatic transmission or a six-speed manual transmission. 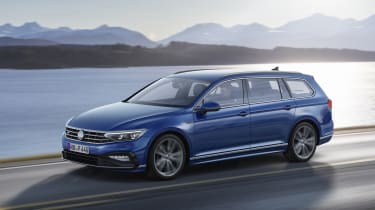 The updated GTE model will have a larger capacity 13kW battery than the current car, allowing far more electric-only running; expect up to 36 miles of silent motoring on a charge. A new driving mode for cities and low-emission zones has been introduced, which will allow emission-free driving in urban areas. Fast-charging isn’t available, so the car’s battery takes four hours to replenish.

A Passat Alltrack model will complete the line-up. It’ll feature higher ground clearance and rugged styling, and will only be available with four-wheel-drive and a DSG automatic gearbox. While it won’t compete with a Land Rover off-road, it’ll offer extra security in bad weather conditions and will be ideal for buyers living at the end of slippery tracks or driveways.

If you want to see how the new Volkswagen Passat compares to its rivals, check out our reviews of the BMW 3 Series, Audi A4 and Mercedes C-Class.