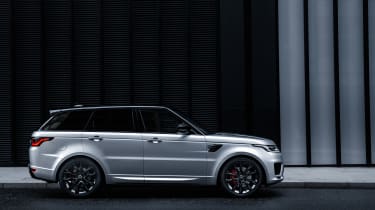 The exclusive Range Rover Sport HST special edition has been unveiled by Jaguar Land Rover. It is the first Range Rover model to feature the manufacturers all-new 3.0-litre straight-six mild-hybrid Ingenium engine along with a range of exclusive interior and exterior trims.

Under the bonnet, the HST’s 3.0-litre straight-six engine gets a turbocharger, an electric supercharger and a mild-hybrid system that combine to produce 394bhp and 550Nm of torque, resulting in a 0-62mph time of 6.2 seconds and a top speed of 140mph.

The mild-hybrid system can recover energy using regenerative braking, before then storing it in the 48V battery for use by the electric motor in a variety of scenarios. Around town, for example, it can give the HST an additional power boost when pulling away from the lights. This system makes the HST the second most efficient version in the Range Rover Sport model line-up with its CO2 emissions figure of 213g/km and claimed 30.5mpg only bettered by the Range Rover Sport PHEV plug-in hybrid.

This new engine can only be specced with an eight-speed automatic gearbox and also gets the Range Rover Sport’s all-wheel-drive system, active suspension with adjustable air springs, and the Terrain Response 2 off-road driving system. This technology monitors the terrain as you drive, ensuring that it adjusts the chassis and drivetrain settings automatically to keep you moving across difficult ground.

The interior of the HST gets a number of exclusive trim options, including a set of 16-way adjustable front seats, suede-trimmed steering wheel and gear lever and chrome accents in the interior. Buyers also get the latest driver assistance technology including high-speed emergency braking, steering assist and adaptive cruise control.

On the outside, the Range Rover HST gets a number of sporty styling cues, including red brake calipers, unique badging and carbon fibre accents for the bonnet, front grille, side vents and tailgate - alongside a choice of two alloy wheel designs, and five exterior colours.

The HST special edition is available to order now, with prices starting from £81,250.

Interested in a Range Rover? Take a look at our in-depth verdict on the Range Rover Sport PHEV model.