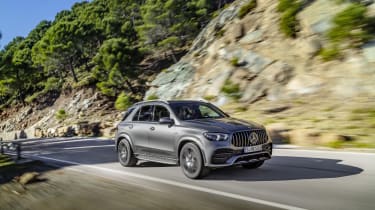 Mercedes has revealed the AMG GLE 53, which becomes the most potent version of Mercedes’ smaller seven-seat SUV. As with other 53-badged models in the Mercedes range, the GLE uses a mild-hybrid system to improve fuel economy and boost performance. The GLE 53 will eventually sit below the V8-engined AMG GLE 63 in terms of price and power.

The GLE 53 produces 435bhp (including the electric motor’s 22bhp), which is enough for a 0-62mph time of 5.3 seconds and an electronically limited top speed of 155mph. The engine is a 3.0-litre twin-turbocharged six-cylinder unit, shared with the Mercedes E-Class and CLS 53 models. A 48-volt electrical system is used to boost performance and reduce turbo lag.

As with other mild-hybrid systems, the 48v system allows the engine to shut off when coasting to preserve fuel. Despite this, the Mercedes-AMG GLE 53 is designed to prioritise performance - it only manages 30.3mpg on the outdated NEDC emissions test, so it’ll be very costly to run. 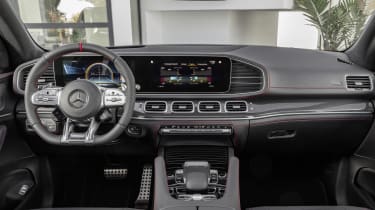 The GLE 53 has four-wheel-drive as standard, plus an advanced ‘Active Ride Control’ air suspension setup. It reduces body lean through fast corners and reduces the impact of potholes.

Aggressive styling complements the car’s power. The front end looks rather menacing thanks to an AMG grille that was first seen on the Mercedes-AMG GT sports car. Below that is a full-width air intake, while the rear end features four exhaust pipes and an aerodynamic diffuser.

Options include a Night Package, which adds darker tinted windows and lots of black exterior trim. Should you wish to make the GLE 53 louder, Mercedes will also sell you a sports exhaust.

Inside, the GLE 53 receives all the latest Mercedes technology, including the two screens that sit side-by-side on the dashboard. The seats are trimmed in leather and Alcantara suede, there’s carbon fibre on the centre console and a few other sporty touches too - making it feel even more special than the standard GLE.

Mercedes hasn’t confirmed when order books will open, nor the car’s price, but expect it to cost around £75,000.

Read our review of the standard Mercedes GLE, or compare the GLE 53 to one of its premium rivals, the Porsche Cayenne. 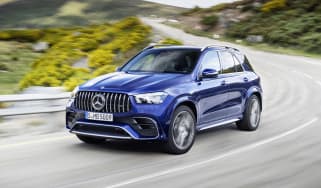