The compact SEAT Minimo will rival the Renault Twizy 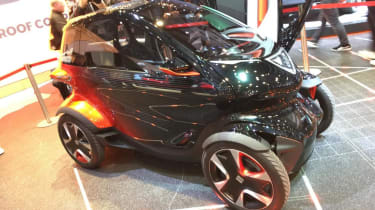 The SEAT Minimo concept has been shown at the 2019 Geneva Motor Show. It’s the latest ‘urban mobility’ concept vehicle to be revealed by a mainstream manufacturer and is expected to go into production by 2021 as a rival to the tiny city EV, the Renault Twizy.

The Minimo features a zero-emissions electric drivetrain with a claimed 60 miles of range on a single charge. Alternatively, the quad battery pack can be swapped out for a fully charged replacement in around four minutes, making it suitable for car-sharing or short-term city rentals.

Like the rival Renault Twizy, the Minimo is official designated as a quadricycle, making it exempt from the regulations that govern normal road cars. It can potentially be driven by anyone from the age of 16-years old upwards who holds a full driving licence. Although the Twizy will be the Minimo’s most obvious rival, the SEAT is expected to represent a significant leap forward relative to the Renault in terms of tech and comfort when the production version finally arrives.

Measuring only 2.5m long and 1.24m wide, SEAT has designed the Minimo with layered plastic body panels, with the exterior featuring dye instead of paint to ensure any minor body damage is less visible. It has a single headlight, and upward opening doors making access easier in the tightest of parking spaces. With its small dimensions, it’s possible to park three Minimos in the same space as a small SUV.

Inside, the Minimo features 1+1 raised seating with a 360-degree view. The rear seat can be used for either luggage or a passenger. A digital dial cluster sits in front of the driver, which can be linked to a smartphone. SEAT claims that interior space for both driver and passenger is the same as it is in its Arona SUV.

Check out our review of the Renault Twizy to see how it compares to the Minimo, or see our picks for the best electric cars you can buy in 2019.