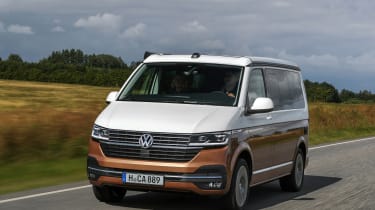 The new Volkswagen California campervan has been revealed ahead of its official launch at the end of August. Dubbed the California 6.1, the facelifted model will carry over the tech and styling shared with the VW Multivan 6.1 announced earlier this year. Pricing has yet to be confirmed, but we’d expect the new model to be priced at around £47,000.

On the outside, the facelifted California gets a tweaked front grille, swept back headlights, LED daytime running lights and a revised front bumper with a larger air intake.

Most of the changes focus on the cabin, with a redesigned dashboard including an optional 10.25-inch digital dial cluster and the option of a new internet-enabled 9.2-inch touchscreen infotainment system. This setup comes with an integrated SIM card (eSIM), enabling an array of online functions and services including music streaming and Internet radio stations. 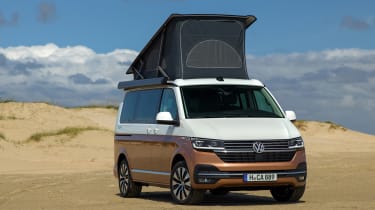 VW has updated the living and sleeping areas of the new California to make them more comfortable and easier to operate when camping, with changes including sliding doors, push-buttons for the kitchen surface covers and two new interior colours. It also gets a new ‘Level’ function with a display that shows the angle of the ground, making it easier to get the California level when camping. The electrically powered pop-up roof is operated by a new ceiling-mounted digital display.

Other useful additions include a wealth of new safety tech such as Lane Assist, Side Protection and Trailer Assist, which helps you manoeuvre when towing a trailer. Additionally, VW has also fitted Crosswind Assist, which helps stabilise the vehicle during strong crosswinds.

Minor mechanical updates include a switch from hydraulic to electromechanical steering, and a new range of turbocharged 2.0-litre diesel engines, which will include a previously announced 196bhp version. It’s expected that lower powered versions of this engine will also be added to the range.