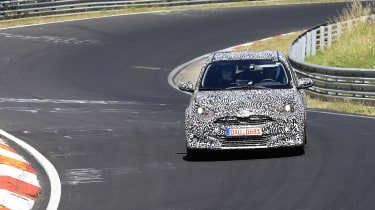 The next-generation Toyota Yaris has been spotted testing ahead of a likely 2020 release. The new Yaris could share some of its bodywork with the Mazda2 hatchback and may be launched at the 2019 Tokyo Motor Show in October.

The Toyota Yaris is a rival for superminis like the Ford Fiesta, Hyundai i20 and Honda Jazz, although it’s currently the only city car available with a hybrid powertrain. Prices should stay close to the current model, so expect entry-level models to start from around £13,500 and top-spec models to cost nearer £17,500.

Considering the Toyota RAV4 is only available as a hybrid and the Toyota Corolla has a choice of one petrol and two hybrid engines, the new Yaris range is expected to be mostly hybrid. The current Yaris is available with two petrol engines: a ponderous 1.0-litre (shared with the smaller Toyota Aygo) or an economy-focused 1.5-litre non-turbo engine. The Corolla’s punchier 1.2-litre turbocharged engine could replace both of these when the new model arrives. 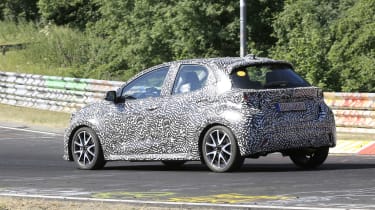 In April, the US-spec Toyota Yaris made its debut at the New York Motor Show, which was clearly little more than a rebadged Mazda2. It was made clear that the car wasn’t coming to Europe but these spy shots show a car that looks very similar to the American version. The window shape, roofline and boot lid closely resemble the Mazda, and the headlights look like the pointy ones fitted to US cars.

As a result, we cannot say for sure whether this car will be a European model. However, the rear bumper and grille seem to be slightly different, which may be a result of different crash regulations in the US and Europe, or different styling tastes. The car is being tested on the Nurburgring race circuit in Germany, and it’s unlikely that Toyota would choose to test the car there if it wasn’t destined for European markets.

If the Toyota Yaris does come to the UK as a rejigged Mazda2, you can expect a far more upmarket interior than the one in the current car. In fact, if the American car is anything to go by, the interior will be almost completely carried over from the Mazda. The next-generation Yaris could use many Mazda parts, including the steering wheel, infotainment system, interior trims and the main touchpoints, like the climate control dials.

Read our review of the Toyota Yaris Hybrid, or see where the Yaris features on our list of best reliable small cars.