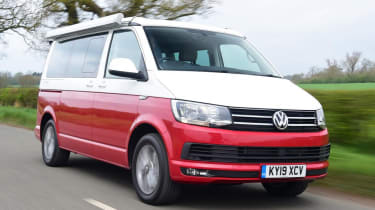 Volkswagen has been making campervans for 60 years and the California name, which has been around since 1988, continues to draw a cult following. This hotel on wheels packs a lot into a small package and is perfect for impromptu camping trips or lazy weekends at the coast.

There are three varieties on offer, the basic Beach, a better-equipped Ocean and the expensive and fancier limited-run Edition model. We’re testing the Volkswagen California Ocean variant here.

The Ocean variant is a step up from the more basic Beach version turning the California into a proper campervan with a two-burner gas hob, sink and deep fridge. There’s also onboard freshwater and waste tanks, an electric hook-up to the mains and an electrically-operated pop-up roof. Technology includes a six-inch touchscreen infotainment system, three-zone climate control, sat nav, Apple CarPlay and Android Auto. 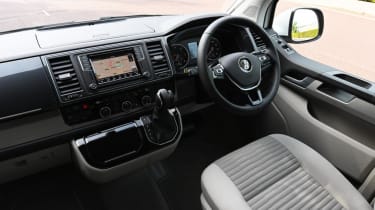 The California Ocean sleeps four, just about. Two can fit in the pop-up roof bed – and with sprung slats, it is surprisingly comfortable. Less relaxing, however, is the climb up to it, through a gap that’s only as wide as a sunroof. You’ll need to be fit and agile to sleep up there. Two more can fit in the cabin, once you’ve reassembled the seating and folded out the bed attachment. It’s a bit fiddly but will become second nature with practice.

Compared to a regular motorhome or caravan, the California feels small but it makes up for that with a variety of clever storage solutions that means the available space works around you. The two front seats swivel round to create a living room, a stowaway table resides in the sliding side door when not in use, and there’s a pair of folding chairs stored in the tailgate. There’s also a small wardrobe, two kitchen cupboards and some shelving. It really is a home away from home, but when you want to use the bathroom, you’ll need to use the public option as there is no facility for toilets or showers on board. A particularly neat feature is the pop-out awning – something you’ll probably use a lot as you’ll spend a lot of time outside because of the limited space inside.

Based on the Transporter van, the California drives well despite its size and weight. The driving position is comfortable, with a commanding view of the road ahead and the large, all-round windows give an excellent view out. The door bins are big, and there’s a pair of decent-sized gloveboxes as well as 12v and USB charging points.

The California, in Ocean spec, comes with a choice of three diesel engines, a 150hp, a 199hp or a punchy BiTDi 204hp twin-turbo model. Whichever engine you choose, all deliver decent performance and we would counter whether you actually need the most powerful versions as this isn’t a car you’re going to want to hustle along. 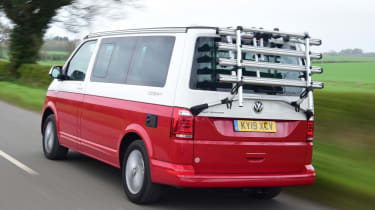 A six-speed manual is available as standard, but the DSG automatic gearbox suits the California well and would be our preferred option. There’s also the option of four-wheel drive with the Ocean, useful for helping you get out of muddy campsites or festivals.

Refinement is, as ever, a VW strong point; the California Ocean is almost as quiet as the firm’s passenger cars and the only noise you’re likely to hear is your pots and pans rattling around in the cupboards as you drive.

The California, even in its most basic guise, is not cheap. Prices start at £43,295 for the Beach version with the entry-level 150hp engine, rising to £70,629 for the fully-specced 30-year anniversary model. The Ocean model we’re testing starts at £53,267. Residual values are, however, famously strong so it will hold on to its value better than most.

It’s little wonder Volkswagen has dominated the camper scene for more than 60 years. If you need a reasonable-sized camper van for weekends away – and you don’t need space for more than four – you will struggle to find better for the money. The Ocean as tested might be £10,000 more than the entry-level Beach variant, but it comes with more creature comforts and convenience features that make your camping trips that little bit easier. The fact that any California campervan will hold on to its value so well makes the proposition even sweeter. Yes, it might be small compared to more traditional motorhomes, but with its ingenious storage and space-saving touches it continues to set the standard among rivals.

If you want to know more about the VW California range, why not check out our review of the California Beach campervan.