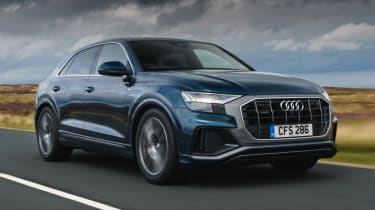 It’s perhaps inevitable that the Q8 S line exists at all – as SUVs continue to be one of the most popular car segments in the UK. Audi is also good at spotting opportunities for niche cars for niche buyers. Which brings us neatly to the Q8, the bigger brother to the Q7 (at least in name if not stature) and a car that brings Audi into the premium coupe SUV market.

Where the Audi Q7 majors on practicality and usefulness with seven seats, the Q8 emerges as a more luxurious and stylish choice, a proper rival to cars like the BMW X6, Range Rover Velar and Mercedes GLE Coupe.

But to give Audi the credit it deserves, this is not a rebadged, jazzed-up Q7. While underneath the mechanical parts are the same, on the surface the cars are poles apart. The Q8 is rakish and swoopy, with a larger grille and a sportier, more angular nose. It also gets new headlights, full-width LED lights on the rear boot lid, and frameless windows for that coupe vibe. 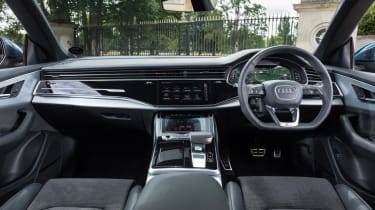 The interior takes the luxury note up a notch, too. Its design is inspired by Audi’s A8 luxury saloon. The new dashboard has a minimalistic and modern touch, with piano black plastics and sleek brushed metals, though we found the plastics to be a little creaky in places.

At the heart of the experience is Audi’s slick MMI Touch dual-screen infotainment system, as found on its more luxurious models. It is comprised of two screens; a 10.1-inch main display and an 8.6-inch secondary display above the centre console for functions like the radio and climate control. It’s a wonderful piece of tech, but if you’re used to a more analogue experience, you might find all this tech at your fingertips distracting on the move.

To complete the visual appeal is a 12.3-inch virtual driver display that wraps across the dashboard in front of the driver. It’s still the clearest digital instrument on the market.

When it comes to space, the Q8 loses the seven seats you can get with the Q7, but it doesn’t otherwise affect the experience in the cabin. Despite the swooping roofline, there’s still plenty of headroom for rear passengers. Where this impact can be felt is in the boot, which isn’t as vast as the Q7’s. And there’s a slightly awkward tail lip that means you have to lift loads over rather than slide them straight in. In comparison, a Range Rover Sport has more space but it feels evenly matched to the BMW X6 and Mercedes GLE Coupe. 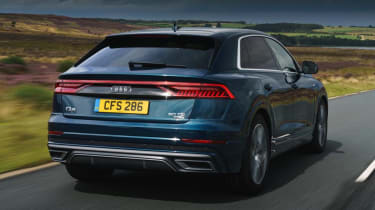 On the road, the Q8 won’t feel too dissimilar to other large Audi SUVs, but one area where it does benefit is with standard Sports air suspension. In its most comfortable setting, the Q8 is comfortable while still remaining flat through corners. It does occasionally feel a little fidgety, though. Things don’t go so well when you put the suspension into sport mode. The ride quality becomes nervous with lots of bumps and thuds becoming noticeable, especially on UK roads. The steering, like most Audis, is practically devoid of feel but the car responds well to your inputs. Dynamic mode does sharpen it up, but the ride compromise isn’t worth it.

As for engines, the turbocharged 3.0-litre V6 diesel engine is mated with a 48-volt mild hybrid system, which gives seamless engine shut off in stop-start situations and even gives the car a coasting-feeling at motorway speeds. The only slight downside is the eight-speed automatic gearbox, which doesn’t quite respond as quickly as you’d perhaps like.

The Q8 S line is a very different car to the Q7 and it will appeal to different people. We love its modern design touches and elegant and beautifully-appointed interior. Despite its rakish profile, it feels roomy inside, too. The 3.0-litre diesel as tested is supremely refined with the standard mild hybrid tech and it’s great to drive, so long as you don’t put the air suspension into dynamic mode too often. Audi once again has shown its luxury car credentials and this is a coupe SUV to be taken seriously.

If you want to know more about the Audi Q8, check out our full in-depth review of the Q8 range or the flagship performance SQ8 TDI model. 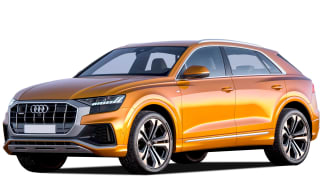