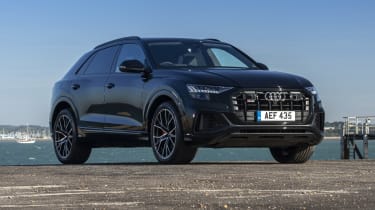 The Audi SQ8 is a high-performance SUV that slots into the Q8 range beneath the incredibly powerful and expensive flagship RS Q8. The SQ8 is typical of Audi’s large, luxury models, with a powerful engine, array of technology and high-quality materials making it both quick and comfortable.

Until late 2020, the SQ8 was fitted with a 4.0-litre V8 diesel engine producing 429bhp but this has now been swapped for a twin-turbocharged petrol V8 of the same size with 500bhp. It's likely a move to help the SQ8 appeal in the US and Chinese markets, and the engine suits the SQ8's character. The SQ8 is fast enough to keep up with most sports cars away from the lights but it's now even less economical.

Helping keep the car’s considerable mass in check, active roll bars use motors powered by the SQ8's 48-volt mild-hybrid system to reduce body roll. These slacken off when you aren't throwing the SQ8 into a bend, resulting in surprisingly good ride comfort, with air suspension able to filter out most imperfections, even when fitted with huge 22-inch alloy wheels. It's a good deal more comfortable than the RS Q8, which is fitted with a more powerful version of the same engine.

The interior is as classy as you’d expect in an Audi SUV costing around £80,000, with three digital screens blending seamlessly with high-quality materials including wood, metal and leather. The infotainment system is easy to use too, making the SQ8 just as easy to operate as an Audi A3. Upgrade to the top Vorsprung trim and the already lavish spec is bolstered with a heads-up display, Bang & Olufsen stereo, panoramic roof and four-wheel steering system to boost agility.

The Audi SQ8 has a huge amount of technology under its bodywork, all designed to deliver the most performance possible while also fighting to keep fuel consumption and CO2 emissions in check. This includes a 48-volt mild-hybrid system that uses a small generator to harvest energy under deceleration. This can be used to power the car's electrics when the engine is off and to give acceleration a small boost. 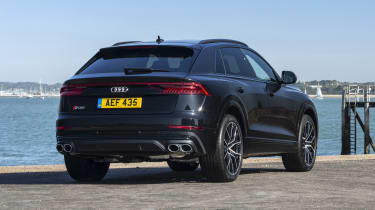 Audi claims the SQ8 can return up to 23.5mpg, a figure that's down on the 31mpg of the prior diesel but one that isn't likely to shock prospective owners of a 500bhp SUV too much. CO2 emissions are quoted at around 270g/km, which comfortably puts the car in the top BiK bracket for company-car drivers. Car tax will cost £475 in years two to six, then £150 a year thereafter.

All versions of the SQ8 are in group 50, so it’s an expensive car to insure. Maintenance bills are likely to be similarly steep but Audi’s three-year warranty does at least allow for unlimited mileage in the first two years of ownership, with the third year limited to 60,000 miles. Four and five year warranty extensions are available, too.

In place of the 4.0-litre V8 TDI diesel engine, which delivered a prodigious 429bhp and 900Nm of torque, Audi has seen fit to draft in a petrol V8 of the same size. This produces 500bhp and should appeal to US and Chinese buyers, where diesels have never been as popular. 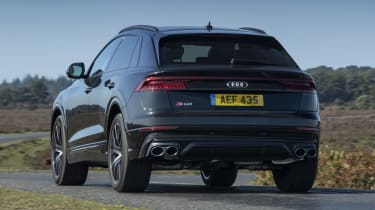 The SQ8 surges forwards with every brush of the accelerator pedal, with a smooth eight-speed automatic gearbox and quattro four-wheel drive helping build momentum. The engine sounds good, arguably suiting the SQ8's character better than the diesel. It's the same unit as the one fitted in the Audi RS Q8 but with 92bhp less and a £20,000 lower price tag, which some will view as a bargain. Acceleration from 0-62mph takes 4.1 seconds and the top speed is electronically limited to 155mph.

Despite the performance, it's the composure of SQ8 models fitted with an active roll control system that's most impressive. Fitted as standard in the top Vorsprung trim, it seamlessly reduces body lean without ruining ride comfort, and the result makes the SQ8 feel like it's shrunk around you on certain roads. It's just a shame the accurate steering is lacking in feel.

Despite its size and weight, the SQ8 handles deftly for a high-riding SUV. Switching it into the ‘Dynamic’ drive mode sharpens the suspension, steering and throttle, making it feel more agile in corners. Its lower and wider stance means it feels quite a bit more engaging and enjoyable to drive than the closely related Audi SQ7.

At lower speeds, the steering is accurate thanks to its rear-wheel steering setup, with the quattro all-wheel-drive system and huge tyres working together to provide considerable cornering grip. You can turn into bends quicker than you’d think and then use the torque of the V8 engine to fire you out the other side.

The car’s sizable power output is also beneficial at motorway speeds, too, with 70mph possible with little effort from the engine, making the SQ8 a very refined and relaxed long-distance cruiser.

One of the best attributes of the SQ8 is that it remains comfortable, despite its sporting upgrades and massive 22-inch alloy wheels. The standard air suspension system does an excellent job of soaking up bumps, even in its firmest mode, with the typical sharp ridges and potholes found on UK roads only occasionally making it into the cabin. It has a more comfy, laid-back feel than the Audi RS Q8, which some buyers may prefer. 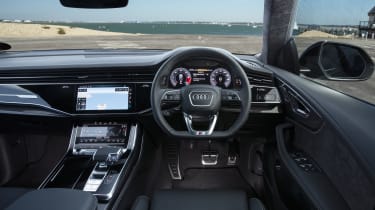 Most of the Q8's excellent interior design is carried over, including a touchscreen MMI infotainment system with clear and intuitive menus. Sports seats with diamond-stitched leather add to the sense of occasion, while aluminium or carbon trim can be fitted depending on your taste and the car's specification. It all adds up to a model that feels as sturdy and luxurious as you'd hope.

Despite its coupe-SUV pretensions, the Audi SQ8 is still very spacious

It might be less practical than the massive Audi Q7 on which it’s based but the SQ8 still offers lots of room for front and backseat passengers. You'll also be able to carry a lot more with you than in any sports car, with 605 litres of space behind the rear seats. Folding them forwards extends this to 1,755 litres, a figure that's competitive with a lot of performance estates. 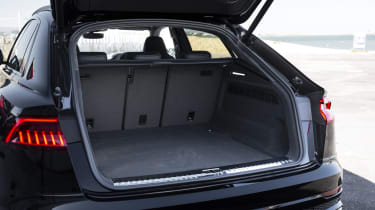 There's also slightly more space than you'll find in the back of the BMW X6, with 580 litres of boot space, while the Mercedes GLE Coupe matches the Audi for luggage room.

There's masses of technology, but could that hinder reliability?

The SQ8 is one of Audi's flagship models, so it's as full of technology and safety kit as you'd expect. This should make it very reassuring to drive with family and friends onboard, but reliability is less well known. 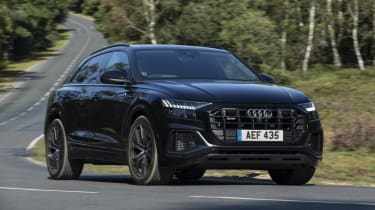 The car is based on the same underpinnings as the Q7 but a lot of its technology, including its 48-volt mild-hybrid system and electric compressor are too new for us to judge their reliability. Big, fast SUVs are also very complicated and tend to put lots of strain on their components, so some teething problems should probably be expected.

Long-distance drivers will find that the SQ8 can ease the strain of hours spent behind the wheel, with enough sensors and systems to practically drive itself in traffic on the motorway when the Tour Assistance Package is fitted. In fact, a tablet-sized computer is required 'behind the scenes' to interpret all the data from the car's five radar sensors, five cameras and 12 ultrasound sensors. 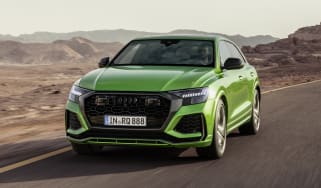