"The Audi RS Q8 is quicker than most sports cars while offering estate-car practicality, but running costs are high” 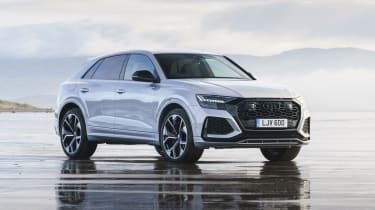 The performance coupe-SUV is a niche market that's flourished in recent years, and the Audi RS Q8 is the latest member of the club. Sitting atop Audi’s high-performance SUV range, above the V8 diesel-powered SQ8, it competes with the BMW X6 and Mercedes-AMG GLE Coupe, as well as the Porsche Cayenne Coupe Turbo and the Lamborghini Urus with which it shares parts, most notably the engine. 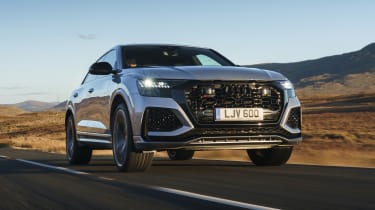 The engine in question is a 592bhp 4.0-litre twin-turbocharged V8. When the RS Q8 is in its most aggressive driving mode, the sound of the engine from the huge oval exhaust pipes is intoxicating. Zero to 62mph is dispatched in a Cayenne Coupe-matching 3.8 seconds, but what's more impressive is the RS Q8's handling and traction, which allow it to keep up with notable sports cars on a twisting road or track.

Despite Audi's attempts to temper its thirst with mild-hybrid technology, the RS Q8 will also require deep pockets to run. Returning just 20mpg and emitting 314g/km of CO2, it's unlikely to appear on many company-car shortlists. The tyres on the car’s huge 23-inch wheels are also not going to be cheap when they need replacing. 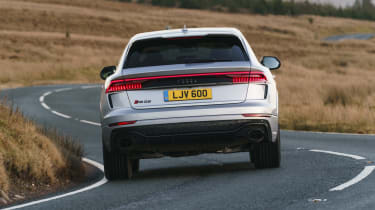 Given the car costs around £100,000, you'd expect the RS Q8's interior to be special, and it’s modern and full of technology. The difference between the inside of the RS Q8 and the entry-level Audi Q8 isn’t as significant as some people might like, though, even if there's a smattering of RS badges and sports seats. You'll need to upgrade to Carbon Black or Vorsprung specification for the full effect, as these feature black Alcantara for the headlining, steering wheel and gear lever.

Unless it's electric, you're unlikely to expect a 592bhp, two-tonne SUV to be anything other than perilously expensive to run, both day-to-day, and in terms of maintenance. Still, Audi has thrown a good deal of efficiency-boosting technology at the RS Q8, including its latest 48V mild-hybrid system. This harvests energy as the SUV slows down, storing it in a small battery and using it to power the car's electrics. Not only does this take some of the burden away from the engine, it also allows engine-off coasting (for up to 40 seconds) and improved stop/start performance. 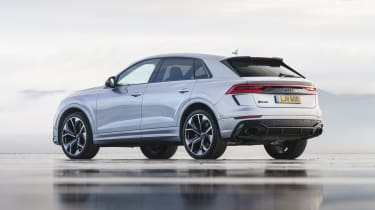 Even with all this gadgetry, the RS Q8's large 4.0-litre, twin-turbocharged V8 petrol engine can only manage 20.5mpg and emits 314g/km of CO2. Road tax costs £565 a year for the first five renewal years (£145 thereafter), and insurance is likely to be in the top group 50. Then there are items like its 22- or 23-inch tyres and massive ceramic brakes to consider - they're unlikely to have a very easy life. Of course, rivals like the Lamborghini Urus are just as costly to run, but alternatives such as the Porsche Cayenne Turbo S E-Hybrid Coupe (up to 57.6mpg) and Tesla Model X use alternative fuel powertrains to bring costs down.

The Audi RS Q8 is as quick around the infamous Nürburgring race track in Germany as a relatively recent model of the Porsche 911 GT3 RS - a lightweight, thoroughbred sports car. It's lap time of 7:42 seconds (in damp conditions) is also a record for an SUV, achieved in part because of the car’s impressive quattro four-wheel-drive system.

It also helps that the 592bhp V8 in 'RS2 mode' is an animal, barking as the RS Q8 goes from 0-62mph in 3.8 seconds to match the time of the Cayenne Turbo S E-Hybrid Coupe. It's electronically limited to a top speed of 155mph though, whereas the Porsche can run onto an astonishing 183mph. 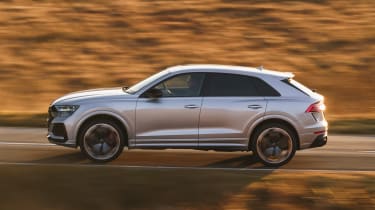 Like the latest Audi RS6 Avant, the RS Q8 has new RS mode buttons on its steering wheel, in a similar fashion to BMW's M buttons. These can be used to choose one of the car’s eight driving modes, without having to delve into the car's infotainment menus. In ‘Comfort’, the RS Q8 doesn't feel too different to the regular version; it’s mostly refined on UK roads, even with its huge 23-inch alloy wheels.

Switch into Dynamic mode and the RS Q8 becomes distinctly wilder. The air suspension lowers and the steering and throttle response switch into their most hardcore settings. The engine is much more responsive too, with every prod of the throttle resulting in explosive bursts of acceleration and a growling exhaust note.

Despite the huge power on offer, the RS Q8 delivers all of its performance competently thanks to grippy quattro all-wheel-drive, with 0-62mph taking only 3.8 seconds. It’s an astonishingly quick time for a near three-tonne SUV.

To rein in all of the car’s power, Audi has fitted huge 10-piston brakes to the RS Q8. While the brakes do an amazing job of slowing the car down under hard braking, the forces involved do remind you of the car’s sheer size and weight. 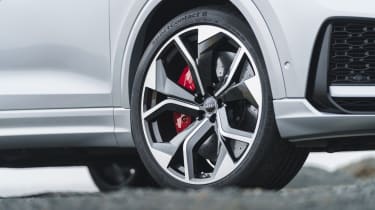 The car remains stable and composed when driven on twisting roads, shrugging off body lean and inspiring confidence with grip from the huge tyres. The extensive array of hi-tech assistance systems, however, does separate the driver from the action somewhat; rivals, such as the Porsche Cayenne Turbo, offer more agility and driver involvement.

When you want to take things more steady, the RS Q8 feels very normal to drive, hiding the more extreme side of its character convincingly. At lower speeds, even on 23-inch alloy wheels, the ride is refined and composed, although shudders caused by bigger potholes do make it through to the interior. The engine and gearbox are unobtrusive during normal driving, with the rear-wheel steering making the car easier to manoeuvre around the tight confines of a city than you’d expect.

A lovely interior, but it's available for a far lower price in the regular model

Like most go-faster versions, the Audi RS Q8 retains most of the same interior design of the standard model but there are plenty of welcome additions too. Most noticeable are the beautiful Super Sport seats, finished in Valcona leather. Carbon Black and Vorsprung specifications get a black Alcantara headlining, while the latter also features a head-up display and seats with ventilation and massaging functions.

The RS Q8 gets Audi’s latest infotainment system, which is already in the standard Q8 and A8 Saloon. It gives the cabin a hi-tech and upmarket feel, incorporating a 10.1-inch infotainment screen and a lower 8.6-inch panel that is used to adjust the heating and ventilation.

Audi’s Virtual Cockpit digital instrument cluster panel also features, with a full-colour 12.3-inch display. This display can be configured by the driver to show an array of information, including a 3D map display and custom RS-specific readouts. 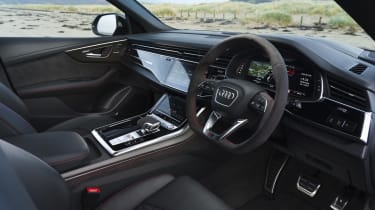 Carbon Black and Vorsprung versions also get an 'RS design package', in either red or grey, adding contrasting stitching, along with Alcantara trim for the centre console, gear selector and steering wheel.

Buyers will also find RS logos on the steering wheel, illuminated door sills and exterior, to remind them where their £100,000 has been spent.

There's as much space as hot estate cars offer

Despite being classed as a 'coupe' SUV, the RS Q8 is still a big vehicle, and it's very practical as a result. Headroom is adequate in every seat - although there's no third row offered like in an Audi Q7. 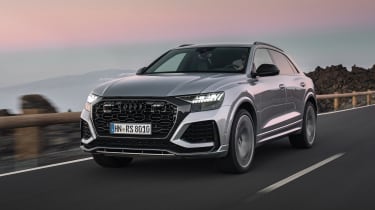 There are three seats in the back, and the bench can also slide fore and aft to juggle passenger and luggage space. With the rear seat backrests folded down there's 1,755 litres beneath the powered hatchback.

Lots of safety kit is available, but the RS Q8's sheer complexity could hinder reliability

The RS Q8 is the most potent version of Audi's flagship SUV, and as such it's bristling with safety technology. However, it's also exceedingly complex, which may not be the best news for reliability. It's too early to know for sure, of course, but myriad electrical systems and such high performance could cause some gremlins. 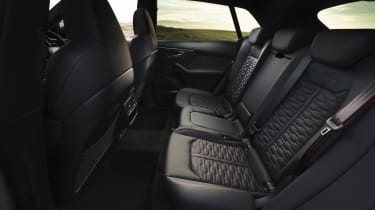 Active safety equipment should help make the RS Q8 very relaxing to drive when you just want to cruise in the car. A myriad of sensors are positioned around the car to help keep you in your lane on the motorway and out of danger should a car, bicycle or pedestrian come into your path.