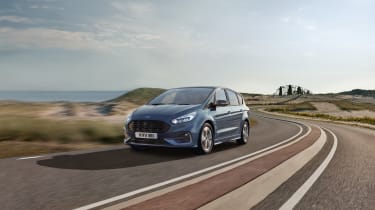 The Ford S-MAX and Ford Galaxy have both been updated and are on sale now. Styling updates include new grille and alloy wheel designs. New technology includes a WiFi hotspot and both models feature new, more comfortable front seats. The new S-MAX starts at £30,490, while the Galaxy is £33,210.

Ford’s styling changes for the S-MAX and Galaxy help to further differentiate the models from each other, with even the rooflines receiving a tweak. At the front, both cars receive new grilles that are larger and rounder in shape. The S-MAX ST Line has a black grille, while the grille on the top-spec Vignale model is finished in satin chrome. The Galaxy is treated to bright chrome highlights.

The styling of the S-MAX reflects the more sporty appearance of the first generation model. The appearance is now less bulbous and sportier, with a more rakish roofline and side skirts. There are also new bumpers and 19-inch alloy wheel designs. 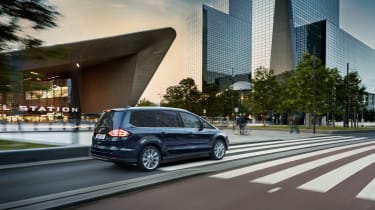 Both models feature new front seats that feature 18 adjustable positions and are said to reduce back pain. While the second and third seating rows can be folded flat by operating control buttons in the boot, these can be electrically operated in the Galaxy.

Upgraded technology for the S-MAX and Galaxy includes a WiFi hotspot, which allows connectivity for up to 10 mobile phones. It also acts as a safety aid, offering the ability to seek local information on hazards that can be used to warn the driver in advance. Data is acquired from the emergency services, the local authorities and information gathered from other vehicles that are also online.

Ford have improved the Pre-Collision Assist system, which detects pedestrians and vehicles and warns the driver. In the event the driver doesn’t respond in time, it will automatically apply the brakes at speeds of up to 50mph. Adaptive cruise control is also available.

S-MAX and Galaxy models are offered with the same 2.0-litre diesel engine as before, with either 148bhp or 187bhp. They can be paired with either a six-speed manual or an eight-speed automatic gearbox.

Interested in knowing more about the Ford MPV range? Read our reviews of the S-MAX and Galaxy.