If you need to transport a large family, a seven-seat MPV still makes a lot of sense. Here are the best new and used models to buy

The large MPV (Multi Purpose Vehicle) was a very popular choice in the UK until SUVs began to sweep up a larger and larger share of their consumers. This trend has reduced the large MPV segment to a much smaller group of new cars, but there is lots of choice on the used market. We’ve picked the five best new MPV models and the five best used options for buyers who need seven seats and lots of boot space.

The major advantage of the MPV over the many seven-seat SUVs that have entered the market is, of course, space. The SUV body shape may look more appealing, but it comes with compromises that include how much room there is for third row passengers. Added to this is access to that third row that can be difficult for older children or those less mobile. With a large MPV, you’re much more likely to be able to sit seven adults in relative comfort.

The MPV was designed to drive like a regular car without the harshness and lack of refinement you used to get from van-based minibuses. These days, van-based MPV models are much more car-like and that’s another reason why purpose-built MPVs like the Renault Espace and Ford Galaxy saw popularity decline. 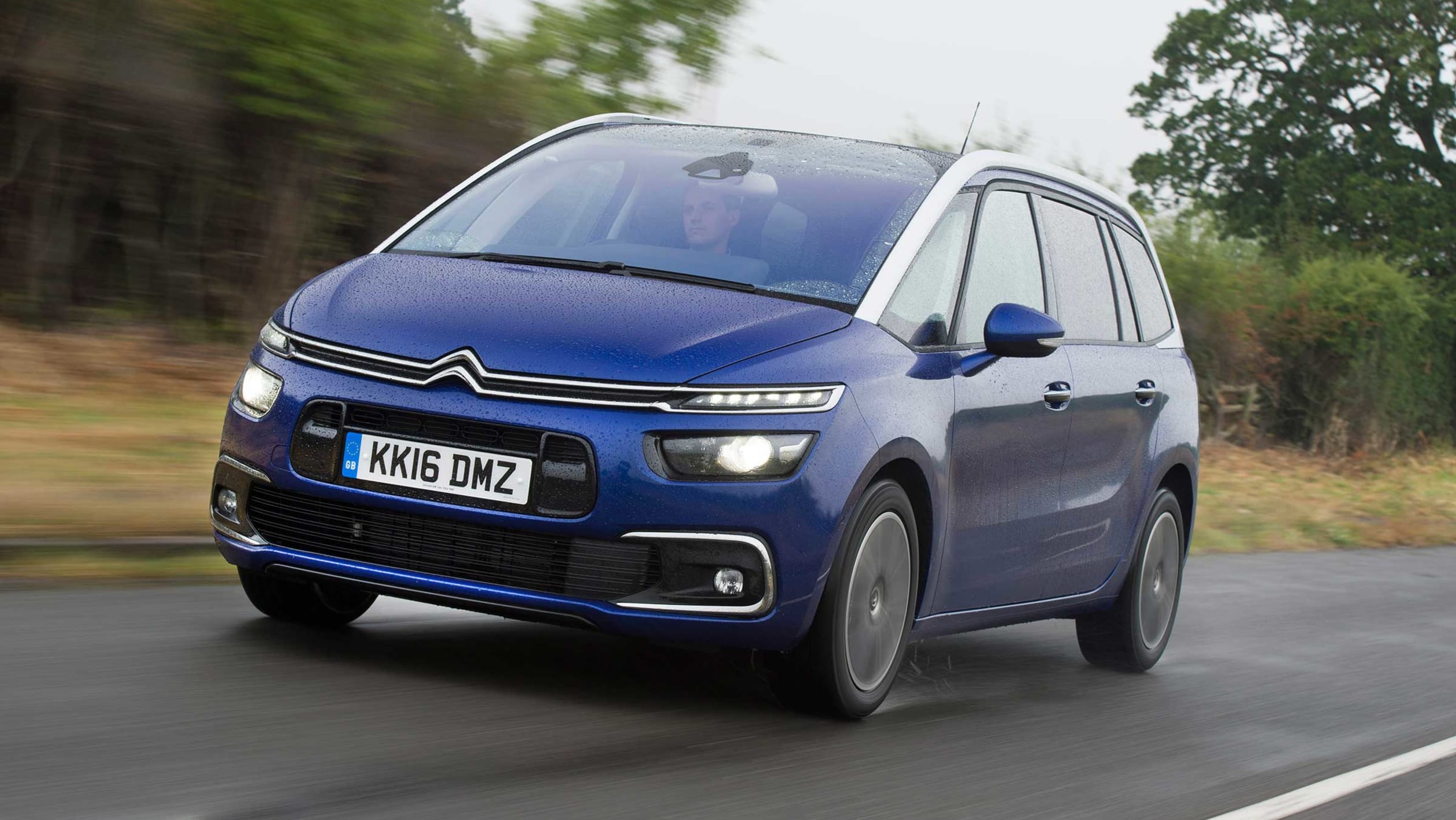 The basic concept behind MPVs still makes plenty of sense, however. They were originally conceived to offer maximum space and a high level of comfort with the lowest possible running costs. Fuel economy and CO2 emissions are better than with SUVs, which usually have heavy 4x4 systems to move around and worse aerodynamics.

You’ll also get a full package of safety features, some of our choices even have three ISOFIX points across the middle row and almost all score high safety ratings. Then you have the added practical touches that tend to be built into an MPV that just make living with these cars that little bit easier.

We’ve compiled our best five new and five used MPVs in the list below for you to choose from. Included is everything from the humble Kia Carens that can be snapped up on the used market for less than £10,000 all the way to a Mercedes V-Class with a range-topping specification just shy of six figures.

Below you'll find our pick of the current large MPV crop. Scroll down for our best used MPV choices...

A large airy cabin and tough build quality make the Volkswagen Transporter Shuttle a top pick for its ability to stand up to family duties while carrying up to nine people. There is no getting away from the van dynamics from behind the wheel but the transporter chassis is more agile than you would expect. In basic trim, climate control is standard fitment along with several safety systems, including autonomous emergency braking.

All this space and refinement does come at a cost and the Transporter Shuttle is one of the most expensive MPVs on our list. Engine choice is very limited with only a 2.0-litre turbo diesel engine currently available.

We liked the versatility of the Ford Tourneo Custom MPV and the ability to seat up to nine people, although some passengers may feel the pinch with all the seats occupied. The cabin was spacious and there was plenty of shoulder room and big windows to stop a long journey feeling claustrophobic.The rear seats are also removable for when you need to move things instead of people.

There is no getting away from the van DNA behind the painted bumpers of the Tourneo Custom but it is well equipped and easy to live with. On the downside you do pay for all the equipment and it doesn’t have the bargain price you may have hoped for from a Ford.

The Ford Galaxy shares its underpinnings with the Ford S-MAX and itself offers a pretty decent drive, helped by a similar choice of economical, powerful engines. It’s taller, though, and all three rows of seats are adult-sized. Alternatively, you can easily fold them all away to turn the Galaxy into a stylish and comfortable van. Alongside its popularity with families, the Galaxy has found success in the VIP transport market, with top-of-the range versions cosseting customers with a long list of standard equipment.

The Galaxy is currently only available with a petrol-electric hybrid engine, which promises over 40mpg and a good towing capacity. Previously, the engine range consisted of two diesels: the best-selling 148bhp 2.0-litre EcoBlue or the more powerful 187bhp version of the same engine. The former can be had with a six-speed manual or eight-speed automatic gearbox whereas the latter is automatic only. The range-topping model can also be found with four-wheel drive. The Galaxy is available in two trim levels: Zetec and Titanium. The entry-level is impressively well-specced, so we’d only suggest opting for the range-topping Titanium if you want features such as sat nav, keyless entry and tinted windows.

The Mercedes V-Class is a relative of the Vito van, but you wouldn’t know it from inside. In fact, it’s more like the luxury transport you’d expect to see a pop star or chart-topping rock band pile out of at Wembley Arena. It certainly has a VIP price tag, with the entry-level Sport model costing just over £58,000. The Extra Long version can seat eight adults in comfort, with every seat upholstered in leather trim. Of course, all the doors open electrically, and the driver should also appreciate a 360-degree bird’s-eye camera to help negotiate any car park or urban manoeuvre.

Despite its high price, the V-Class is offered with two modest 2.0-litre diesel engines. The range-topping V 300 d produces 236bhp and makes the car surprisingly quick for an MPV, while still returning around 47.9mpg with emissions of 154g/km of CO2. This makes the latest V-Class 13% more economical than the old model with the 2.1-litre diesel. Its £40,000-plus price tag means VED (road tax) costs over £500 in years two to six, owing to a government surcharge for more expensive cars.

The Peugeot e-Rifter is what we would regard as a competent family workhorse. It’s simple, spacious and practical, especially thanks to its rear sliding doors, and travels along in near silence. A range of up to 172 miles is claimed by Peugeot with a charging time of 0-80% in 30 minutes at a fast charger. Reassuringly, the battery has a guarantee covering it for 8 years/100,000 miles to hold 70% of its charge capacity.

Boot space is impressive, with the Rifter’s van DNA having its effect: in five-seat guise, the standard Rifter has a large 775-litre boot. Choose the long-wheelbase version and this increases to a huge 1,050 litres. There is also a host of technology including a rear mounted camera and lane departure warning system. Although the physical controls for heating the interior mean you won’t have to scroll through on-screen menus to get warm in the winter.

Below are the best large MPVs to buy used right now...

Among all MPVs, the space-age Citroen Grand C4 SpaceTourer is probably truest to the original concept of a big yet stylish body with three rows of seats that can be arranged in various configurations. It earns the top spot in our used car list thanks in part to its remarkable fuel economy.

The Grand C4 SpaceTourer received updates and a facelift in both 2016 and 2018 but both of these made only minor changes to the exterior. Importantly, a name change from Grand C4 Picasso to Grand C4 Spacetourer happened at this time and so those shopping for the earlier cars should search for the previous nameplate. More noticeable improvements were made to the touchscreen system and interior trim.

Kia dropped the Carens from its lineup in 2019 and has since only offered a large SUV for those that want 7 seats and lots of space. That makes a used Carens even more attractive, especially as many will have the balance of Kia’s seven year/100,000-mile warranty still to run.

The Kia Carens is a mid-size MPV and so if you are likely to use all seven seats regularly you may want to check if it fits your family as space in the back is less than with some other options here. Most models will be fitted with the 1.7-litre diesel engine in either 114bhp or 139bhp guise, although a 133bhp 1.6-litre petrol engine was available. Ride quality is excellent with potholes and uneven surfaces soaked up by the suspension.

The Volkswagen Sharan is at a slight disadvantage on account of being one of the more expensive cars to buy new on this list and strong residual values. Its relatively high price aside, it has a long list of virtues, with excellent build quality, low running costs and a seven-seat interior. It does suffer a few flaws, though – deploying the third row of seats doesn’t exactly endow the sixth and seventh occupants with tonnes of space and it severely reduces luggage capacity, too.

We think it’s fair to say the Sharan isn’t exactly the most memorable car to look at, either. On the plus side, it wears the classy and desirable VW badge on its nose, and for many that will make all the difference. SE trim is the pick of the range, as this includes alloy wheels, folding picnic tables, Bluetooth connectivity, cruise control and a leather steering wheel. Like many MPVs, the Sharan is most relaxing to drive when fitted with a diesel engine and the 148bhp 2.0-litre is the best of the bunch.

As an alternative to the Volkswagen Sharan, the SEAT Alhambra offered near identical specifications at a slightly lower price and it’s the same story on the used market. Many buyers and sellers are aware of the similarities and so don’t expect a huge price difference between the two but for the budget conscious the Alhambra is the better choice. Forgettable looks shouldn’t deter you as the interior is well built and many of these vehicles have run up high mileages on private hire fleets proving their long lasting nature.

A 1.4-litre petrol engine was available but they are very rare and so you will almost certainly be looking at the 2.0-litre diesel engine with 148bhp. A more powerful 2.0-litre diesel engine was also available in high specification models. Features across the range include useful tray tables for middle row passengers and climate control. The last models sold in the UK were in 2020 and so most will now be out of warranty but many of the parts in the Alhambra are tried and tested across the VW family with very few serious reliability issues.

For families who want all the practicality a Peugeot, Citroen or even Volkswagen can offer, but with added refinement and a premium badge, the BMW 2 Series Gran Tourer is an attractive alternative to mainstream models.

Originally sold with either petrol and diesel engines, which aren’t the most economical on our list but score better marks in terms of performance. We’d choose the smoother and more economical 2.0-litre turbocharged diesel option, which can return up to 54mpg. With all seven seats in use, the Gran Tourer has a 145-litre boot space, which is more than what the Volkswagen Touran offers. With the rearmost seats folded, this figure increases to 560 litres.

Check out our guides to the Top 10 most economical family cars and the Top 10 best large SUVs.