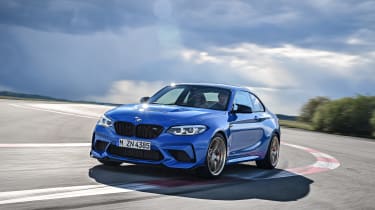 BMW has launched the BMW M2 CS, an even faster version of the BMW M2 that has an extra 38bhp, plus a number of performance tweaks and a much higher top speed. Only 2,200 CS models will be produced and, while BMW hasn’t said how many the UK will get, it has confirmed that the car will cost £75,320.

The 3.0-litre twin-turbocharged petrol engine is used in the regular M2 Competition but it’s been fettled to produce 444bhp, an increase from 406bhp. With the dual-clutch automatic gearbox, the 0-62mph time has dropped by two tenths of a second to four seconds exactly. You can choose a manual gearbox, which increases the 0-62mph back up to 4.2 seconds. The M2 CS has had the top speed limiter removed, so it’ll continue to a top speed of 174mph.

As well as increasing the power output, BMW has reduced the weight of the M2. Carbon fibre is used for both the roof and bonnet, as well as the spoilers, diffusers and even the mirror caps. These changes are also said to improve the aerodynamic design and the downforce generated in corners. 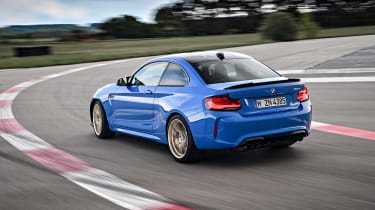 The BMW M2 CS has also been treated to some choice upgrades. Adaptive ‘M’ suspension is standard, alongside M Sport brakes with red-painted calipers. New 19-inch lightweight alloy wheels are covered in sticky Michelin Cup tyres, and you can improve the stopping power by choosing carbon-ceramic brakes from the options list.

Also fitted is an active differential, which has a special mode that allows much more wheelspin. This, BMW says, allows drivers to ‘explore the car’s dynamic limits’. You can also choose Sport, Sport+ and Efficient modes, which change settings for the steering weight, throttle response and suspension stiffness. 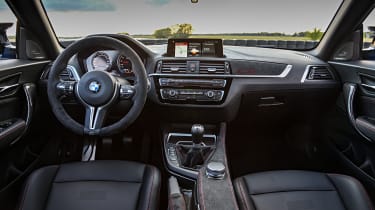 As the range-topping model, the CS gets some interior upgrades over the standard M2. The sporty bucket seats are trimmed in leather and Alcantara suede-like fabric, and the latter is also used on the lower centre console, the door cards, the steering wheel and the dashboard insert. There’s a CS inscription on the dashboard in the same red as much of the interior stitching, while the door handles are made from carbon fibre.

The M2 CS costs almost £24,000 more than the M2 Competition, but its exclusivity and upgrades are likely to appeal to collectors and enthusiasts.

Read our guide to the best sports cars on sale now.