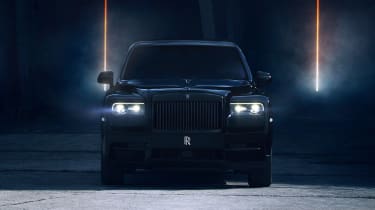 The Rolls-Royce Cullinan is now available in Black Badge form. Aimed at the company’s younger clientele, the Black Badge features darkened exterior and interior detailing. This version of the Cullinan can be ordered now, with prices revealed upon application.

Over 44,000 paint colours are available but the company expects that many buyers will go for the standard non-metallic black paint. All the exterior trim pieces that would be chrome, including the front grille surround, badges, boot handle, exhaust pipes, air inlet surrounds, the base of the Spirit of Ecstasy and the bonnet mascot itself, are all painted black. 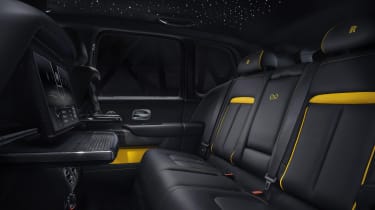 Inside, there’s a new type of carbon-fibre used on some of the veneer, while striking ‘Forge Yellow’ leather is offered for the first time. Just like in other Rolls-Royce models, the Cullinan Black Badge gets the Starlight headliner that uses 1,344 fibre-optic lights to mimic stars in the sky.

There are infinity symbols dotted around inside, which were used on Sir Malcolm Campbell’s record-breaking Blue Bird K3 hydroplane. That hydroplane used a Rolls-Royce engine and the company now uses the symbol on Black Badge models to symbolise its ‘unrelenting pursuit of power’.

The Black Badge comes with more power than the standard Cullinan. Rolls-Royce’s 6.75-litre V12 engine features 592bhp here, up by 29bhp. There’s now 50Nm more torque, bringing the total to a mountainous 900Nm. Four-wheel-steering and an eight-speed automatic gearbox are fitted, while the brake pedal now has less travel before the brakes start to ‘bite’.

Read our reviews of Rolls-Royce models, or see how the Cullinan compares to the Bentley Bentayga.