"Despite being one of the most cossetting and relaxing cars available, the Rolls-Royce Ghost is almost as rewarding to drive as it is to be a passenger" 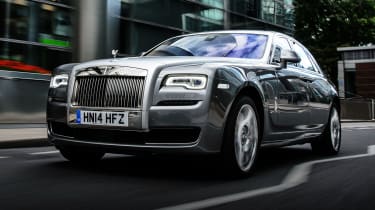 The Rolls-Royce Ghost is a massive four door luxury saloon that is powered by a hugely powerful BMW-developed 6.6-litre twin-turbo V12 petrol engine producing 563bhp. Similar in profile to it's big brother, the Phantom, the Ghost costs £80,000 less and is slightly smaller in comparison. It's still no shrinking violet, however, weighing in at 2.4 tonnes and measuring a huge 5.4 metres in length

Inside, it features all the top-quality materials you'd expect to find in a Rolls-Royce - still one of the most exclusive car makers in the world, including a computer control system heavily based on the parent company's (BMW) iDrive design. Behind the wheel, driving the Ghost is effortless.

Huge reserves of power result in staggering acceleration, whilst handling is hugely impressive for such a large car. Advanced air-suspension easily deals with every sort of road imperfection, whilst passenger refinement levels are extremely high. There aren't many rivals for the Ghost, but you should also look at a long-wheelbase BMW 7 Series, a Bentley Mulsanne and a Mercedes-Maybach S600 if you're considering a Ghost.

Not as expensive to run as the Phantom

The BMW-derived 6.6-litre V12 engine is very thirsty returning little more than 20mpg. Emissions well into the highest tax bracket, resulting in an annual tax bill of £460. This is unlikley to trouble the super-wealthy owners of the Ghost too much, however.

Hugely impressive for such a large car

The best seat in the Ghost is up-front, situated behind the thin-rimmed steering wheel and in full control of the mighty 563bhp V12 engine. Out on the road, only the very largest lumps and bumps make themselves known to those on the inside, and even then you'd be hard stretched to notice them and the steering is beautifully weighted. Floor the throttle deep into the thick carpet and the 2.4-tonne Ghost lunges forward cracking 0-60mph in just 4.7 seconds. It manages its huge weight in the corners too, the air suspension allowing some body roll but ensuring the movement is always well-controlled. Driven with care and accuracy, it makes for a very rapid and effortless cross-country tool.

Rear passengers are treated to one of the best interiors in the automotive industry. Exquisite leather and deep lambswool carpets ensure occupants are comfortable whilst the unique switches, clocks, panelling and heater controls all give a bespoke feel. Despite the fact that only the very highest grade materials and technology are used, the interior always feels delightfully simple and elegant. There are no flashy details and it doesn't show off just how advanced it is. Overall, the effect is a perfect blend of both classic design and modern detailing.

You won't be left wanting for space inside

Reverse parking the Ghost can be a stressful operation but helpful sensors and the proximity warming system remove most of the guess work. The huge mirrors that seem pointless when driving suddenly also become very useful. The EWB (Extended Wheelbase) model has 330mm of legroom in the rear- effectively doubling the amount of the standard car and allowing even the very tallest passengers to fully extend themselves and wallow in the lap of luxury. The boot measures in at 490 litres - perfect for carrying a couple of large designer suitcases.

Such is the weight and build quality of the Ghost, it is likely to fare very well in the event of an accident - as, unsurprisingly, Euro NCAP are yet to crash test one. The use of many BMW parts - including the engine, bodes well for reliability even if it slightly taints the hand-crafted feel.

It may well be hugely expensive, but it does feel worth it.

Despite the immense engine, opulent interior and sense of occasion, the Ghost remains hugely expensive. The BMW 7 Series 760Li has a similar engine and is less than half the price, while also being faster and more fuel efficient than the Roller. None of this matters to Rolls-Royce buyers however, particularly in Asia where size and badge appeal are paramount. Optional extras include night vision, lane departure warning, head-up display and adaptive 'intelligent' cruise control. There is also almost endless scope for interior and exterior cutomisation - Rolls-Royce like to accommodate most of its clients' wishes, although only "within reason". 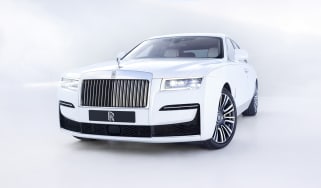 The new Rolls-Royce Ghost sits on an aluminium platform and is powered by a 6.75-litre V12 engine
Rolls-Royce Cullinan SUV breaks cover 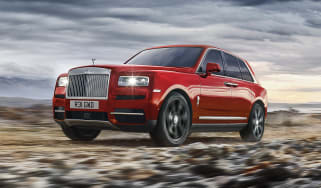