The 360 specification slots into the Qashqai range between the Acenta and Tekna models. 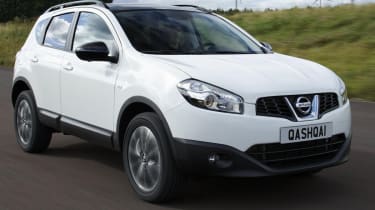 A new Nissan Qashqai 360 model has been added to the firm’s popular SUV range. The 360 specification slots into the range between the Acenta and Tekna models, and replaces the ntec+ spec. But although it costs from £19,945, the same as the outgoing ntec+ grade, it features more equipment as standard and is on sale now.

The 360 takes its name from the inclusion of Nissan’s 360° Around View Monitor system, which integrates sat-nav with Bluetooth and smartphone connectivity, along with four cameras to give a ‘helicopter view’ when parking.

Also included are 18-inch alloys, a panoramic roof, rear privacy glass and gloss-black roof rails and door-mirror caps. The Qashqai 360 also features part-leather upholstery and gloss black plastic interior trim all as standard. Buyers will also be able to opt for a new Storm White pearlescent paint finish as a £500 optional extra. The 360 spec is available on all five-seat Qashqai and seven-seater Qashqai+2 variants, and on all engine and gearbox options.

The Nissan Qashqai 360 is expected to become the most popular version in the range. The previous ntec+ car accounted for around 60 per cent of UK Qashqai sales and alone outsold all Kia Sportage and Hyundai ix35 models combined in the UK.

Nissan predicts that most buyers will opt for the Qashqai powered by Nissan’s 1.6 dCi diesel engine, which features stop-start to help it achieve CO2 emissions figures of 119g/km and return a claimed average of 62.8mpg.