Citroen has launched the new Citroen C4 Picasso with a gallery of new pictures. The images show the car in various different specifications, and display the interior and boot as well.

The Citroen C4 Picasso 2014 is a people carier, or MPV, and offers a bold and distinctive look that rivals the Ford C-MAX and Renault Scenic. The C4 Picasso is available now, and costs from £17,500.

New Citroen C4 Picasso prices start with the entry-level VTR with a 118bhp 1.6-litre petrol engine, which costs from £17,500. Meanwhile the top of the range Exclusive+ model with a 1.6-litre diesel engine is priced from £24,455. Prices for the top-sepc Exclusive models start at £21,060.

The Citroen C4 Picasso 2014 release date is now- you can go out and buy one today. The larger C4 Grand Picasso, for buyers in need of more room, launches later on this year.

Six different engines are available for the new C4 Picasso, including a 90bhp 1.6-litre turbocharged diesel that gets 74mpg and 98g/km in emissions. There’s also a 1.6-litre petrol engine with 154bhp, and a cheaper version of the 1.6-litre diesel that had only 104bhp and emits 105g/km – so road tax is cheap, but not free.

The base VTR models get automatic air-conditioning, automatic wipers and lights, parking sensors, digital radio and fold-away tables. The next spec up, Exclusive, adds 17-inch alloy wheels, keyless entry, a leather steering wheel, sat-nav and a 12-inch high-definition display. Finally, the top Exclusive+ models, that cost about £2,300 more than the Exclusive ones, get 18-inch alloys, radar-guided cruise control, tinted windows, a panoramic sunroof and a massage seat for the driver.

The new C4 Picasso weighs 140kg less than the current model, and the focus on aerodynamics means it has a distinctive new design. The panoramic windscreen in particular adds to the futuristic looks of the new C4 Picasso, as well as the slim headlight design.

As a result of the new shape and increased wheelbase, rear legroom and boot space have been improved – the luggage area is bigger by 40 litres, at 537 litres. A further 93 litres can even be added by sliding the rear seats forward, and the folding front passenger seat means even really long items can be loaded in.

The new Citroen C4 Picasso features a seven-inch touchscreen that is used to control the air-conditioning, optional sat-nav and media system. Another 12-inch screen can be used to display sat-nav instructions, driving information or even a photograph.

Options for the C4 Picsasso include keyless entry, a powered tailgate, automatic parking assist technology and a 360-degree camera so you can see totally around the car. There’s also the Lounge Pack, which features massaging front seats and more comfortable headrests. There will be eight colours and three alloy wheel designs available for the C4 Picasso 2014.

Active cruise control, which automatically keeps a constant distance from the car in front, is available for the new C4 Picassso, and there are also high-beam lights that automatically activate to stop you blinding other drivers. Other safety equipment includes a blind-spot monitoring system, lane departure warning and self-adjusting front seatbelts. 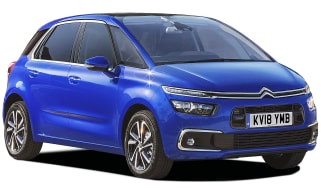