The Ford Fiesta eWheelDrive concept has been unveiled, previewing a new generation of electric car technology.

Ford has teamed up with technology partner, Schaeffler, to create a drivable research vehicle that could lead to improvements in urban mobility and parking by making smaller, cleaner and more agile cars.

The Fiesta eWheelDrive gets an individual motor in each of the rear wheels. Ford reckons it is previewing the future of electric cars by negating the need for a central motor, and therefore freeing up space in the car’s engine bay. The parts needed for acceleration, braking and the car’s safety technologies would all be located in the wheel hub, while the batteries could also be re-housed under the car’s floor –leaving a totally empty space under the bonnet.

Ford says that, as a result, it could remove the engine bay and effectively shrink the Fiesta’s footprint to the size of a two-seater’s without reducing practicality. The car would have the same wheelbase and therefore the same five-seat layout and same interior space.

“This highly integrated wheel-hub drive makes it possible to rethink the city car without restrictions, and could be a key factor in new vehicle concepts and automobile platforms in the future,” said Peter Gutzmer, Schaeffler’s chief technical officer.

In addition to saving space, the eWheelDrive system has the capability to rotate its wheels by 90 degrees and allow the car to move sideways into a parking space. Ford describes this as “potential breakthrough technology – as cities become more populated and congested.” For now, we will have to wait and see as there’s no word when this type of technology will actually be implemented.

It is thought that by 2050, the number of people living in cities globally will have increased from 3.4 billion to 6.4 billion. The number of cars on the road is also expected to quadruple in the same time.

If nothing else, the eWheelDrive system certainly shows the steps manufacturers are taking to reduce their carbon footprint without sacrificing practicality or the way cars drive. 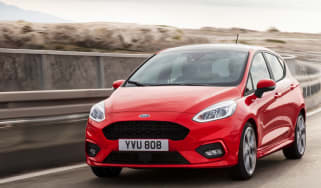