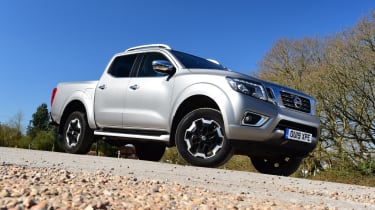 Pickup trucks are, first and foremost, working vehicles. This means they have to be able to carry loads of stuff, tow trailers and keep their occupants reasonably comfortable. As long as you specify it correctly, the Nissan NP300 Navara will do all of these things with ease.

As long as you go for the Double Cab version, there’s plenty of space inside for four people – five at a push. A six-foot adult will even be reasonably comfortable behind a six-foot driver. 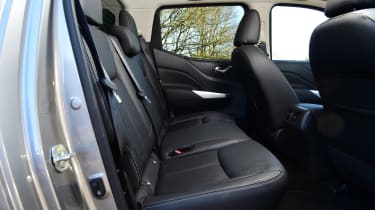 The King Cab doesn’t offer the same amount of space in the back, as it has small, rear-hinged back doors and flip-down rear seats. These are cramped for adults to say the least and if you plan to carry people as well as lots of stuff, we’d recommend the Double Cab. It's also important to note the King Cab is only insured to carry four occupants, rather than five in the Double Cab.

There are, however, disappointingly few cubbyholes and storage spaces inside. You only get door bins, a small glovebox and a storage bin between the front seats. There's also a storage space on top of the dash, and two tiny slots either side of the centre console, but they're too small to swallow smartphones.

The Navara King Cab’s load bay is 1,750mm long, while the Double Cab’s extra passenger space cuts that to 1,537mm. Both versions are 1,560mm wide. It’s an exceptionally large space that can carry over a tonne of cargo, whichever version you go for. 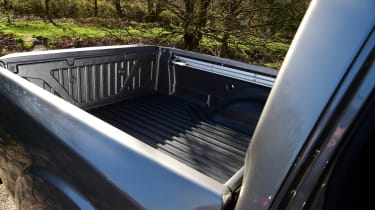 The entry-level, front-wheel-drive King Cab can carry the heaviest load: up to 1,136kg. It also benefits from Nissan’s ingenious ‘C-clamp’ system, which consists of clamps that can slide back and forth along the floor and sides of the load bay floor, allowing you to secure unusually shaped items.

Being a working vehicle, a large towing capacity is a necessity for any pick-up truck buyer. The Navara can haul up to 3,500kg – easily enough for a horsebox, caravan or pretty much anything else you care to mention. This is on par with many rivals and better than the Ford Ranger.