The Peugeot 208 GTi is only available as a three-door, but it’s still reasonably practical

The GTi’s small size might mean there’s not a lot of room inside, but the interior is remarkably spacious. However, there’s no five-door option, no matter which GTi version you choose, which harms accessibility into the rear. The rear seats can hold two adults with relative ease, and there’s enough head and kneeroom for taller passengers. Seating three passengers in the rear might be a bit of a squeeze, though. 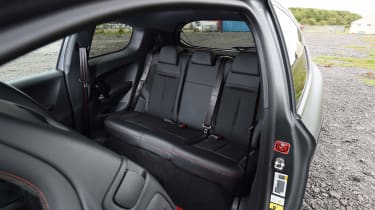 Depending on how you like to sit, the top of the steering wheel can obscure the dials, and not everybody finds the contours of its firmly bolstered front sports seats comfortable, either. Storage options aren’t great. While the interior may look clean, some of the cubbies aren’t that easy to access. Plus, the fuse box takes up a considerable amount of room inside the glovebox – a problem that a lot of Peugeot models seem to have.

Despite being a performance model, boot space isn’t affected compared to the standard 208 hatchback. The 285-litre boot isn’t exactly class leading, but it’s decent. That trumps the rather paltry 211-litre you get in the MINI Cooper S, and is slightly larger than the Ford Fiesta. There is a sizable boot-lip to contend with when loading heavy items, but the opening itself is wide enough and the boot shape is pretty square. 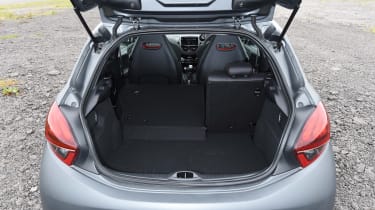 Fold the rear seats down and the total boot space volume expands to 743 litres. The seats don’t fold completely flat, but Peugeot fitted a small cover to make sliding items in a little easier.

In the unlikely event you buy a hot hatchback with the intention of towing, the 208 GTi can pull up to 1,150kg.