The Peugeot 208 isn't the biggest supermini in its class 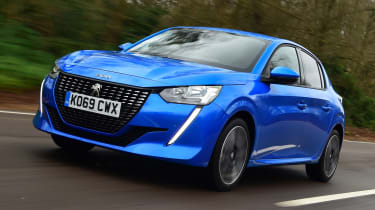 There's been a significant growth spurt in the supermini class, with cars like the SEAT Ibiza and Renault Clio now the size of family hatchbacks from a few generations before. The 208 has bucked this trend somewhat, however, so it's now one of the smaller cars in its class. This makes it light, manoeuvrable and easy to park, but also limits interior space.

The electric e-208 offers the same amount of space because the battery cell has been distributed under the floor to avoid sacrificing any passenger or boot space. 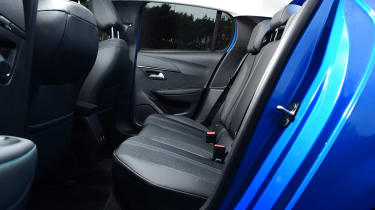 As mentioned, the 208 is fairly compact, so taller occupants will find the Volkswagen Polo and Renault Clio an easier car in which to stretch out. Every 208 now comes with five doors, so it's much easier for passengers to access the back row than in three-door versions of the previous model. Peugeot has also paid more attention to storage, putting a large cubby under the central armrest, along with a tray in front of the gear-lever and another space in the centre console, designed for charging a smartphone. Rear visibility is poor because of the 208's small back window but rear parking sensors are included on most trim levels. 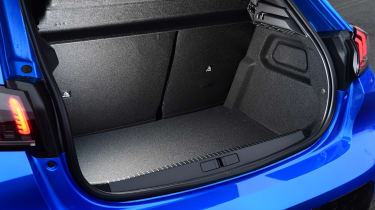 Measuring 311 litres, the 208's boot is average for the class, beating the 292 litres offered in the Ford Fiesta but failing to match the 351 litres of the Polo or vast 391 litres found in the Renault Clio. Fold the rear seats down and there's up to 1,106 litres of space.

If you need to tow a trailer, steer clear of the e-208 as it's unlikely it will be homologated for towing, while the PureTech 75 is only rated to tow a 500kg trailer. The PureTech 100, 130 and BlueHDi 100 versions are all able to tow a braked trailer of up to 1,200kg, making them far better suited to the task.