With its upright styling and big body, the Peugeot 3008 doesn’t look like a car that’ll be fun to drive, which means you’re in for a pleasant surprise. Peugeot’s stiffened the suspension, so the 3008 resists body lean in corners well, while its steering is surprisingly direct and communicative. The result is that the 3008 is actually fun to drive down a country road, especially if you opt for Dynamic Roll Control, which makes the car feel even more agile and comes as standard on Active models and above.

That agility does come at the cost of a stiff ride, however, and this is most notable in the hybrid, which is laden down with heavy batteries. We’d also advise against the automated manual gearbox, which suffers from jerky gearchanges. 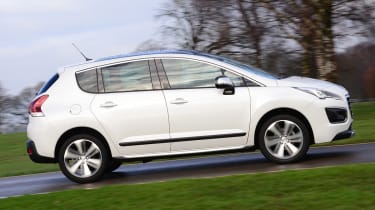 The Peugeot 3008 was one of the first hybrids to come with a diesel engine rather than a petrol. It offers strong performance, getting from 0-62mph in 9.2 seconds. That’s impressive for such a large car, particularly when you consider its excellent fuel economy. Sadly, though, you’ll have to rack up some serious mileage if you intend to recoup the hybrid’s higher list price.

Go for the much cheaper basic diesel and you’ll notice a drop off in performance – it takes 12 seconds to get from 0-62mph – but the engine is well suited to moving the heavy 3008 along. The 2.0-litre BlueHDi diesel is just as economical as the smaller engine but produces 30bhp more, or 148bhp in total. That's enough to get the car from 0-62mph in just 9.7 seconds.

The petrol engine misses out on the low-speed grunt that makes the diesel engines ideal for a heavy car such as the 3008. Nonetheless, the 1.2-litre PureTech petrol model can get from 0-62mph in just 10.8 seconds places it between the two diesel engines.