Peugeot has long had a reputation for poor build quality and reliability, which the newer models in the range – such as the Peugeot 308 – have started to shake off, but they remain a problem in the Peugeot 3008. As a result, it received an average score in our Driver Power 2014 owner satisfaction survey. Safety isn’t a worry, as the 3008 scored full marks when it was crash-tested by Euro NCAP. Buyers can also make their car even safer by selecting extra technology from the options list.

One of the 3008s we drove suffered from a squeaky dashboard, and build quality is an area where the Peugeot scored particularly badly in our Driver Power 2014 owner satisfaction survey. Sadly, it didn’t fare much better for reliability, finishing in 69th position overall out of 150 cars – a nine-place improvement on last year, but still 48 places behind its main rival, the Nissan Qashqai. Comfort and practicality – areas you’d expect the Peugeot to score well for – were both rated highly. 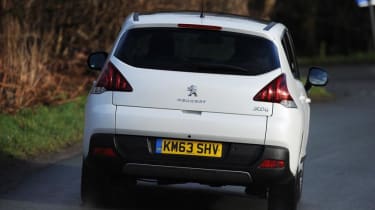 There are no worries with safety, at least: the Peugeot 3008 received five stars when it was crash-tested by Euro NCAP. It comes with all the safety features you’d expect of a modern family car, including multiple airbags, electronic stability control, seatbelt reminder buzzers, traction control, ABS and ISOFIX child-seat mounts. Choosing the Active model lets you add equipment from the options list including a rear parking camera (£935 with sat nav) and Peugeot’s Grip Control system, which gives the car more grip on slippery roads. A head-up display is another option. Yours for £470, this gadget displays information such as your current speed and sat-nav directions on the windscreen so you don’t have to take your eyes off the road.