The Peugeot 508 is a near match for premium rivals on practicality, but Mondeo trumps it on space.

The Peugeot 508 saloon is complemented by a 508 SW estate model, which promises to deliver more interior and luggage space. With that more practical model available, the saloon can be excused for its unspectacular boot space – it's just a shame the rear seats aren't more accomodating. 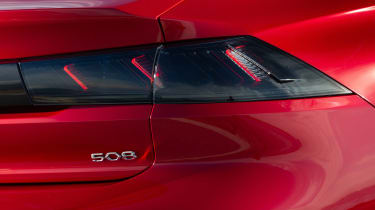 Although many examples of 508 will spend a lot of their lives on motorways with only one of the front seats occupied, Peugeot has ensured that its big saloon is more than capable of fitting in with family life, too. As a result, there's plenty of rear-seat leg and knee room, but taller adults will find the steeply sloping roofline means headroom isn't over-generous. The squarer form of the upcoming SW model should address this shortfall.

Those in the front will find plenty of room, though, and the multi-adjustable seats offer lots of scope for tailoring a decent driving position. Peugeot proudly boasts of a 32-litre total interior storage capacity once the various cubbyholes and pockets are counted up, and the two centre-console cup-holders deserve special mention, especially when ambiently illuminated on upper trim levels. 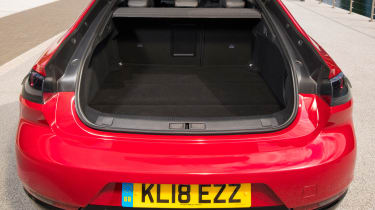 Peugeot claims a boot that's 1,035mm long with the rear seatback in place, and almost two metres long if they're folded out of use. There's 1,133mm of load width between the wheel housings, and a 488mm-tall load will fit beneath the parcel shelf. The 508's boot capacity is given as 487 litres when the rear seats are in use, rising to 1,537 when in two-seat mode.

Those figures are lower than boasted by the 550-litre Mondeo (which expands to 1,630 litres) but competes well with the 490-litre Vauxhall Insignia Grand Sport (1,540 litres with the seats down). Impressively, boot space in the 508 plug-in hybrid model is unaffected by the extra hardware.