Most Peugeot 508 engines offer plenty of power, and keen drivers will enjoy how it handles

The previous Peugeot 508 was certainly no class leader when it came to driver appeal, so can the latest model right its predecessor's wrongs? The answer is yes - up to a point.

The mid-range BlueHDi 160 diesel is quiet and smooth, with a slightly firm ride akin to that of German rivals such as the Volkswagen Arteon. Quite a contrast from the over-soft previous model, then, and the slight trade-off in ride comfort is more than made up for by improved handling. The 222bhp petrol is enthusiastic and powerful, but because it's only available in the top-spec GT trim, it's also rather pricey.

The latest 508 doesn't soak up bumps and ridges quite as uncannily as its predecessor, but it leans far less during spirited cornering. The small steering wheel, which appears a little strange on first sight, really does provide the go-kart feel to match its tiny diameter. Combined with well-judged power assistance and the steering feels quick and precise, although the wheel-mounted gearchange paddles don't always end up where you want them mid-corner. There's little of the sheer exuberance offered by the BMW 3 Series, but the 508 certainly approaches the Volkswagen Arteon and Audi A4 for driver appeal and feels more fun than the Vauxhall Insignia Grand Sport. 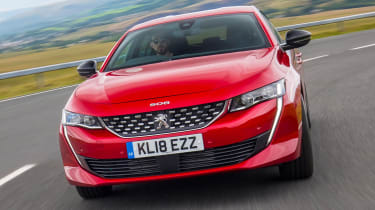 If you're in the mood to take things a little easier, though, the 508 is even more obliging. That slightly firm ride is well-tuned for high-speed motorway dashes, where the active cruise control comes into its own. However, the system in our test car seemed to still have a few bugs to be worked out – it was a bit jerky in operation and occasionally lost track of the car in front entirely.

Entry-level Active trim only offers a 1.5-litre BlueHDi diesel engine option, with 128bhp and a six-speed manual or eight-speed automatic gearbox. Caimed 0-62mph times of 9.7 seconds for the manual and 10 for the automatic are adequate, rather than sparkling. 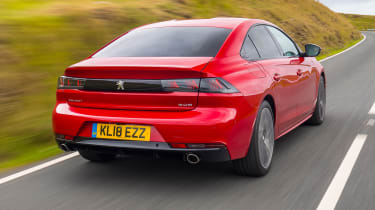 An automatic gearbox is mandatory with the 158bhp 2.0-litre BlueHDi 160 diesel engine, which reduces the 508's 0-62mph time to 8.4 seconds, while the the most powerful 2.0-litre, 177bhp BlueHDi diesel is a tenth of a second quicker still. These two engines offer a top speed comfortably above 140mph, which should make easy work of driving at the legal limit.

Only two petrol engines are offered, both are 1.6 litres in size and and both offer pretty spritely performance. The 177bhp PureTech 180 engine is offered in the Allure and GT Line and provides a 7.9-second 0-62mph sprint. This is beaten by the 222bhp PureTech 225 – an engine that’s reserved for the GT, it takes just 7.3 seconds to get the 508 to 62mph from rest. This is backed up by a 155mph claimed top speed, which is an impressive figure from a 1.6-litre engine that can achieve over 40mpg when driven less vigorously. It's a revvy engine, and a shame it isn't available in trims that represent better value.

Despite its extra heft, the 508 Hybrid doesn't feel too different to drive from the petrol and diesel versions. There isn't excessive body lean in corners and the car generates plenty of grip, which instills plenty of confidence in the driver. The 508 Hybrid starts in electric mode and has adequate performance to keep up with traffic but its full 222bhp only arrives when the petrol engine chimes in.

In hybrid mode, the engine and electric motor are both available but the transition isn't always quite as polished as in some rivals. Push the accelerator down and there can be a short hesitation before the petrol engine springs to life. Zero to 62mph takes 8.3 seconds, and the 508 PHEV feels at its best providing bursts of acceleration at lower speeds. This is thanks to the electric motor, which gives the 508 plug-in hybrid swift and instant acceleration on demand, combining with the petrol engine to ensure a continuous delivery of power. The powertrain is also better suited to the EAT8 automatic gearbox, helping to hide the slight delay in the gearchanges, thanks to the extra power available from the electric motor.