“The Peugeot 508 is a handsome saloon car that’s relaxing to drive, but it’s showing its age against more rounded rivals and looks pricey”

On the face of it, the large Peugeot 508 is an obvious rival to the and Vauxhall Insignia Grand Sport. However, in a bid to force it further upmarket, it's priced a little higher than the

This puts it within a few thousand of premium models like the Mercedes C-Class, BMW 3 Series and Audi A4 – cars which not only carry more badge prestige, but which also experience higher residual values than the Peugeot, which makes quite a difference if you're planning to buy on finance.

Still, figures aside, there are reasons to covet the Peugeot 508, including its stylish and distinctive looks and a range of efficient engines capable of more than 60mpg. If you need lots of space, a Peugeot 508 SW estate is available, along with a hybrid version with four-wheel-drive called the Peugeot 508 RXH, both of which we’ve reviewed separately.

Like the Volkswagen Passat, the 508 is only offered with diesel engines, starting with a 1.6-litre producing 118bhp that can get it from 0-62mph in 11 seconds with a manual or automatic gearbox. Fuel consumption of 74.3mpg impresses, while 99g/km of CO2 emissions qualify it for a 21% Benefit-in-Kind (BiK) band for company-car drivers. 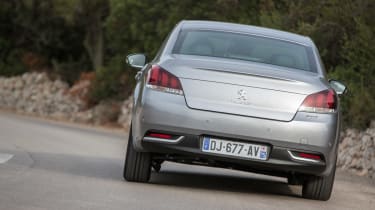 The 2.0-litre diesel offers livelier performance, with both the 148 and 178bhp giving the 508 enough punch to reach 62mph in less than nine seconds. Economy is still decent, with both posting official economy figures of 67.3mpg and emissions of 109 to 110g/km of CO2 for BiK bands from 23 to 24%. But, with the 178bhp version only offered in the top GT trim level, you’ll need to spend around £33,000 to enjoy its extra oomph.

Like most large, French-made saloons, the Peugeot 508 is comfortable on the road. Its suspension does a good job of insulating you from potholes and poor surfaces and it’s a relaxing car to drive – although the Ford Mondeo is ultimately more driver-focused. 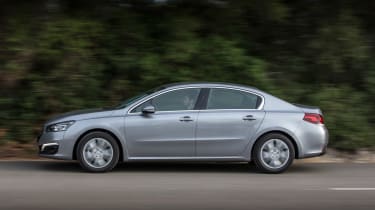 The 508 has a well built interior, with comfortable seats and plenty of soft-touch plastics. Front and rear occupants benefit from plenty of head and legroom, with even the middle seat in the back being comfortable for adults. There are a few too many buttons, though – both on the dashboard and the steering wheel – which makes the 508 feel a little ‘busy’ inside and means finding the right control can be fiddly. The 473-litre saloon-style boot is smaller than the Volkswagen Passat’s, while the Ford Mondeo and Skoda Superb also have larger boots, combined with hatchback practicality.

The top-spec GT trim (only available with the 180bhp 2.0-litre diesel engine) comes with full leather seats (complete with massage function for the driver), a colour head-up display and 19-inch alloy wheels.

In terms of reliability, the Peugeot 508 has an average reputation. In our 2016 Driver Power customer satisfaction survey, it came 83rd out of 150 cars, with a 109th-place finish for reliability. Peugeot’s 17th-place result (out of 32 manufacturers) was also slightly underwhelming. The 508 demands no sacrifices in terms of safety, though: a five-star crash-test result from Euro NCAP is reassuring, as is the lengthy list of safety equipment Peugeot fits to each and every 508.

It's a well-rounded proposition, then, and an enjoyable car in which to make long motorway journeys. It's hard not to be swayed by the Peugeot's premium competition, though, and the 508 doesn't really stands out in any given area. Best considered only if the deal is right.