Peugeot 508 has efficient engines, decent handling and plenty of grip

The Peugeot 508 is an entertaining car to drive, given its large size. Its steering is responsive, with lots of feel, and overall the car feels agile. The suspension setup is well balanced and body lean in corners is minimal, which again helps the 508 to disguise its bulk well compared to rivals like the Ford Mondeo and Volkswagen Passat. It’s not sporty like the Mondeo or Mazda6 by any means, but it is comfortable.

Petrol engines aren’t offered in the 508. However, the diesel range is impressive, so you should be able to find something to suit. Depending on which engine you go for, the car can feel pretty quick, too, but avoid the automatic gearbox if you can. It feels jerky and can make driving more of a chore than it should be.

The 508’s diesels are all smooth and refined, doing away with the harsh noise that’s usually associated with this type of engine. All models offer decent performance; most buyers will be satisfied with the cheapest and least powerful engine – a 1.6-litre that produces 118bhp. It’s not very fast, with an 11-second 0-62mph time, but there’s still enough power for overtaking safely. The more powerful 148 and 178bhp engines take the 0-62mph time under the nine-second mark, at 8.9 and 8.5 seconds respectively. 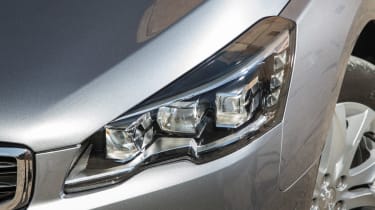 Our pick of the line-up is the 118bhp 1.6-litre diesel, which offers very good fuel economy and decent performance. We’re not fans of the slow and jerky automatic gearbox that comes as standard on the 178bhp 2.0-litre diesel model (and is optional with the 1.6-litre engine). Also, if you’re looking for a sporty-to-drive family car, the Ford Mondeo or Mazda6 will be a better bet.