The Peugeot 508 is very comfortable, despite its firm suspension setup

The 508 has fairly firm suspension to help improve its handling. This approach can often lead to an uncomfortable ride, but Peugeot’s engineers have done a good job of ensuring that isn’t the case here – it really does soak up the jolts from bumps and potholes. The cabin is well insulated (thanks in part to a soundproof windscreen), so engine, road and wind noise are barely audible, making this a relaxing car to drive.

The seats are very supportive, too, feeling great even on longer journeys. So, while the 508 isn't the most comfortable car in the class – the Volkswagen Passat is better in this respect – it’s still very good. 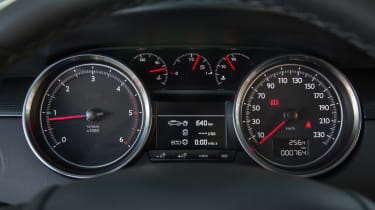 Going against Peugeot’s reputation, the 508 benefits from a high-quality interior – so much so that it competes strongly with the likes of the Ford Mondeo and Volkswagen Passat in this respect. However, the vast array of buttons attached to the steering wheel and the odd placements on the centre console mean the dashboard is cluttered and starting to look dated next to rivals and newer models like the Peugeot 3008 designed with the brand’s ‘i-Cockpit’ layout.

There are four spec levels to choose from: Active, Allure, GT Line and GT. The entry-level model comes with sat nav, 17-inch alloy wheels, daytime running lights, air-conditioning, cruise control and electric windows, as well as Peugeot’s SOS assistance system, which alerts the emergency services in the event of a crash. Allure gets 18-inch alloys, part-leather seats, an electronic handbrake, keyless entry and go and a reversing camera.

GT Line trim benefits from a host of exterior design changes, such as the different alloy wheels and front grille. Inside, passengers sit on the same half-leather seats as the Allure model, but these come with red stitching, and there’s also sporty red colouring dotted across the dashboard. The GT model is further treated to sports suspension, bright xenon headlights and full leather trim. 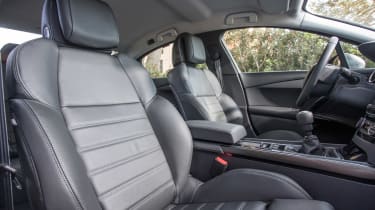 But – and this is a big 'but' – the GT costs almost the same as the much better BMW 3 Series. As a result, we’d recommend picking a less expensive version of the 508.

The options list for the 508 is pretty short, but a variety of alloy-wheel designs, as well as extras such as brushed aluminium door sills, can be specced, along with roof racks and multimedia kits. A multimedia pack, which includes a JBL stereo with DAB digital radio and a head-up display, is priced at around £700. A sunroof costs in the region of £550, the same price as a detachable tow bar. If you drive a lot at night, the £1,100 full LED headlights could also transform your view of the road ahead.