“The Peugeot 508 RXH estate features an increased ride height, longer equipment list and higher price than the standard 508 SW, while the hybrid model is a technologically advanced car.”

The Peugeot 508 RXH shares some mechanical components with the Peugeot 508 SW estate, but it’s higher, wider and features chunky-looking bodywork. The 508 RXH is available with a conventional 180bhp 2.0-litre diesel engine and front-wheel drive, but there’s also a four-wheel-drive diesel-electric hybrid model, which costs about £5,000 more. This uses the same diesel engine, but paired with an electric motor. Both versions feature an automatic gearbox, but the one fitted to the conventional diesel model is far smoother. The 508 RXH sits near the top of the Peugeot range and competes with the Audi A4 Allroad and Volkswagen Passat Alltrack. As a result of this, it’s relatively expensive – although Peugeot does fit the RXH with a generous amount of standard equipment.

The 508 RXH is economical, but the hybrid model isn’t as efficient as you’d expect

Hybrids typically offer increased economy compared to the same car with a conventional engine. Oddly, however, the hybrid RXH is actually no more or less economical than the diesel-engined model. This is mainly due to the extra weight of the electric motor and batteries, as well as Peugeot’s decision make the RXH hybrid four-wheel-drive as standard.

Both versions return 61.4mpg, although the hybrid has CO2 emissions of 109g/km, making for a Benefit-in-Kind (BiK) rate of 21%. The 2.0-litre diesel model’s 119g/km CO2 emissions see its BiK rate rise to 23%. Both cars compare very favourably to the 29% BiK tax of the most efficient Audi A4 Allroad and the 26% BiK rate that the least powerful Volkswagen Passat Alltrack incurs.

After the first year’s CO2-based tax (typically included in the on-the-road price), diesel 508 RXH models cost £140 a year to tax, while the hybrid costs £130. If the list price edges over £40,000 with options, then the RXH will be liable for an additional surcharge of £310 a year in years two to six, bringing the annual bill to £450 during that period.

The 508 RXH is comfortable on long journeys, but less impressive when cornering

The standard Peugeot 508 SW is a relaxing and comfortable car to drive and the 508 RXH continues this theme, albeit with some key differences. Thanks to its electric motor, the hybrid model weighs about 200kg more than a 508 SW with a 1.6-litre diesel engine, and even the conventional 2.0-litre diesel RXH is 140kg heavier. Both models feature a raised ride height and this, together with the extra weight, mean the RXH has more pronounced body lean when cornering than the conventional 508 SW.

Aside from this characteristic, the 508 RXH is a relaxing car to drive. The 180bhp 2.0-litre engine takes it from 0-62mph in 8.9 seconds, while its automatic gearbox shifts smoothly, even if it’s not particularly quick to do so. The 200bhp hybrid RXH is marginally quicker, with a 0-62mph time of 8.8 seconds, but features a different automatic gearbox that’s jerkier in operation.

As a cruiser though, the 508 RXH excels. The hybrid’s electric-only mode allows you to drive silently through town for up to two miles, while on longer journeys the comfortable seats and soft suspension make the RXH an easy car to drive, with poor road surfaces and potholes causing little disturbance.

The 508 RXH is very well equipped and comfortable

While the Audi A4 Allroad and Volkswagen Passat Alltrack have more aesthetically appealing dashboards, neither can compete with the 508 RXH when it comes to standard equipment. Both the diesel model and the hybrid come with sat nav, Bluetooth phone connectivity, DAB radio and a colour head-up display. You also get keyless entry and go, part-leather seats (power-adjustable and heated in the front), a power-operated bootlid, all-round electric windows, cruise control, automatic headlights and windscreen wipers, a reversing camera, and a panoramic sunroof.

As in the conventional 508 SW, the RXH’s seats are comfortable on long journeys, while rear passengers get plenty of leg and headroom. Although the car’s soft suspension makes body lean when cornering pronounced, it does mean you’re well insulated from potholes. Only the jerky automatic gearbox of the hybrid detracts from the RXH’s relaxed driving experience.

The conventional diesel 508 RXH has the same 512-litre boot as the Peugeot 508 SW, which is reasonable if not outstanding. The Ford Mondeo Estate has a slightly smaller boot, while the Skoda Superb Estate and Volkswagen Passat Estate offer about 100 litres more luggage capacity. Choosing the hybrid model of the RXH sees the load area shrink to just 400 litres, as its batteries are stored under the boot floor; this is less space than you’ll find in some family hatchbacks.

You do get chrome roof rails as standard, while the split-folding rear seats can be dropped in a single movement, although they don’t lie entirely flat, limiting practicality slightly. The hybrid model can tow up to 1,100kg, while the 2.0-litre diesel 508 RXH can pull up to 1,475kg.

While some may be put off by the complexity of the hybrid RXH’s electric motor and diesel engine combination, it’s more conventional issues that present a concern with the 508 RXH. Although some reassurance can be taken from Peugeot’s claim that the hybrid’s batteries will last up to 15 years, the standard Peugeot 508 has a middling reputation for general reliability, coming 83rd out of 150 cars in our 2016 Driver Power customer satisfaction survey. A 109th-place finish for outright reliability is far from impressive, while Peugeot’s 17th-place finish out of 32 manufacturers represents a drop of seven places from its 2015 result.

There’s better news when it comes to safety: the Peugeot 508 scored the full five stars in its Euro NCAP crash-tests and in addition to the mandatory stability control, all 508 RXHs come with a host of airbags, emergency braking assistance (which provides extra stopping power during extreme braking) and Peugeot’s Connect SOS system, which will contact the emergency services automatically in the event of the airbags deploying in a crash.

The Peugeot 508 RXH is generously equipped, but expensive

Whether the 508 RXH represents good value for money or not is a matter of perspective. A starting price of around £31,000 seems a lot of money for a Peugeot estate, but it’s still cheaper than an entry-level Audi A4 Allroad or Volkswagen Passat Alltrack. While these cars are arguably more desirable, neither comes with anything close to the amount of standard equipment as the 508 RXH. It’s worth bearing in mind, though, that when the time comes to sell or trade in, both the Audi and Volkswagen will retain more value, so any savings you make by buying a new 508 RXH are likely to be lost in a few years’ time. 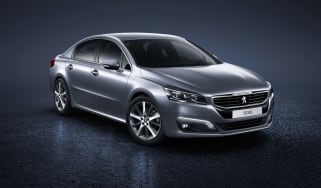 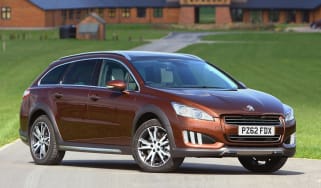 Save more than £3,000 off the price of a four-wheel drive Peugeot 508 estate
Skip to ContentSkip to Footer