"The Peugeot 508 SW is a comfortable and well-equipped estate car, but its rivals offer bigger boots and better value"

The Peugeot 508 SW is the estate version of the Peugeot 508 saloon. It trades on that car’s handsome looks and comfortable interior, adding a bigger boot and greater overall practicality to the mix. Despite these positives, the 508 SW (which stands for Station Wagon or Sports Wagon, depending on who you ask) can’t compete with rivals like the Skoda Superb Estate, Vauxhall Insignia Sports Tourer and Volkswagen Passat Estate for outright boot space. It also seems quite expensive compared to the Ford Mondeo Estate, which is more enjoyable to drive.

The 508 SW is only available with diesel engines, so if you don’t cover that many miles and would rather have a petrol, you’ll have to look elsewhere. Peugeot does make a diesel-electric hybrid model (which we’ve reviewed separately) called the 508 RXH, but this actually has poorer economy than the most efficient diesel in the 508 SW range, partly because it has four-wheel drive as standard. 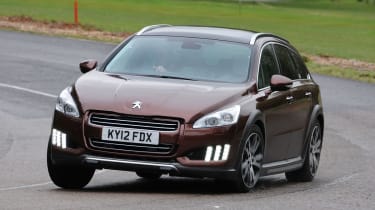 The top-of-the-range 180bhp 2.0-litre diesel engine is quicker still, with 0-62mph taking 8.6 seconds, while road tax of £30 a year and fuel economy of 64.2mpg make it cheap to run. This engine isn’t cheap to buy, though: it’s only available in top-spec GT trim with an automatic gearbox, costing over £32,000. For that money, you could have a well equipped Audi A4 Avant estate or, for about £1,000 more, an entry-level BMW 5 Series Touring estate. Both will lose less value than the Peugeot 508 SW over the course of ownership, too. 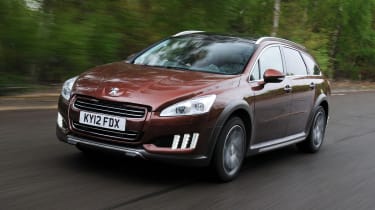 As long as you avoid the top-spec engine, things remain reasonably sensible and the 508 SW is a well-equipped car. There are four trim levels, starting with Active and rising through Allure and GT Line onto the top-spec GT trim with that 180bhp engine. Active comes with a seven-inch touchscreen sat nav, DAB radio, Bluetooth phone connectivity, 17-inch alloy wheels, air-conditioning, cruise control, rear parking sensors and daytime LED running lights.

Moving up to the Allure model costs about £2,300 and brings a panoramic sunroof, a reversing camera, keyless entry and go, half-leather seats (power-adjustable and heated in the front), 18-inch alloy wheels and an electronic parking brake. Above this, GT Line adds twin exhaust pipes, different 18-inch alloy wheels, LED headlights and some red stitching details to the seats for roughly £1,000 more.

The top-spec GT trim includes full leather seats (complete with massage function for the driver) a powered bootlid, 19-inch alloy wheels and a colour head-up display. But we’d recommend the Allure model, as it offers all the equipment you’re likely to want, while keeping the 508 SW’s price relatively low.

The Peugeot 508 SW offers a comfortable and quiet driving experience. The steering offers little ‘feel’, but it’s light and makes the car easy to manoeuvre. The suspension does a good job of ironing out poor road surfaces, while body lean is well controlled when cornering. The 508 SW mantains the reputation of large French cars for a relaxing driving experience. It’s some way off the excellent handling of the Ford Mondeo but, to be fair, most cars are.

Inside, the 508 SW feels well built, with plenty of soft-touch plastics and comfortable seats. Passengers in the rear get plenty of leg and headroom, and anyone sitting in the middle seat will be pleasantly surprised by the amount of room on offer there compared to many cars. The dashboard and steering wheel are slightly crowded with buttons, while the infotainment system works quickly, but is a bit unintuitive to use. These issues combine to make finding the right switch or control harder than it needs to be. The 508 SW’s 512-litre boot is reasonable, if not exceptional: it’s larger than the Ford Mondeo’s, but the Volkswagen Passat and Skoda Superb offer about 20% more space.

Reliability is something of a mixed bag: in our 2016 Driver Power customer satisfaction survey the 508 saloon (mechanically identical to the SW) came 83rd out of 150 cars. Build quality and running costs were praised, but a 109th-place finish for outright reliability may give pause for thought. There are no such concerns over safety, however: the 508 saloon scored the full five stars from Euro NCAP, while all 508 SWs come with a raft of safety features including Peugeot’s Connect SOS system, which automatically alerts the emergency services in the event of a crash.