The latest Peugeot 508 follows in its predecessor's footsteps by vying for company fleet sales, but the French brand is keen for it to appeal to private buyers, too. A choice of fuel-efficient diesel and petrol engines – the latter of which pack lots of power – look set to please both customer types, while other running costs should be well contained.

Those who cover more than around 12,000 miles per year might be best served by one of the 508's diesel engines. Economy figures range from 50.3mpg for the 2.0-litre BlueHDi 180, to 62mpg for the less powerful 1.5-litre BlueHDi 130 diesel with the eight-speed automatic gearbox option (six-speed manual cars manage up to 63.6mpg). 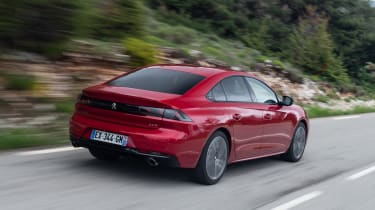 The BlueHDi range is very economical; especially the 1.5-litre found in the 130 version, while the BlueHDI 180 has higher emissions, but it's also RDE2 compliant, meaning its BiK rating is 4% lower than for an older diesel with the same CO2 emissions.

In the petrol camp, the PureTech 180 should be affordable for company-car drivers, thanks to a fairly low BiK bracket, while returning up to 44mpg. This figure – along with the 42.2mpg claimed for the range-topping PureTech 225 – is impressive for a car with such a strong turn of speed.

Officially, the 508 Hybrid can manage between 166.2mpg and 235.4mpg, but its real-world economy will depend entirely on how often you can charge the battery. Do so and you'll be able to make use of its 39-mile driving range at speeds of up to 84mph. Perhaps most importantly, its official 29g/km CO2 emissions figure means it qualifies for the lowest BiK payments of any version, costing company-car drivers in the 40% tax bracket virtually half as much each year as the 1.5-litre BlueHDi diesel. It's also exempt from the London Congestion Charge.

The 11.8kWh battery pack takes under two hours to charge using a 7kW home wallbox, but it's worth noting that the 7kW on-board charger is a £300 option. Without this the 508 PHEV will charge at a rate of 3.7kW.

Most versions of the Peugeot 508 sit comfortably below the £40,000 mark, so won't cost more than £150 for annual road tax. Those that surpass the threshold will cost £475 (£465 for the Hybrid) in the first five renewal years.

The Association of British Insurers (ABI) has published official ratings for the latest Peugeot 508, with the entry-level BlueHDi 130 sitting in groups 22-24. The range-topping BlueTech 225 models sit in group 32 out of 50.

Peugeot 508 owners will need to schedule a workshop visit at least annually, and Peugeot offers service packages to suit your specific circumstances. This will also help manage outgoing costs.

Peugeot's warranty matches the three-year/unlimited-mileage policy offered by premium rivals, but still comes some way short of the seven-year/100,000-mile warranty offered by the Kia Stinger.