"The Peugeot iOn is superb around town, where it feels fast, comfortable and incredibly quiet" 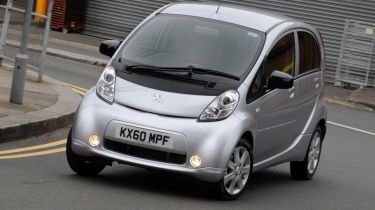 The Peugeot iOn is the sister car to the Citroen C-Zero, and both are based on and built in the same factory as the Mitsubishi i-MiEV. The car started life as the Mitsubishi i, a tall but narrow four-seater supermini with a tiny petrol engine under the boot floor. Mitsubishi has developed a 64bhp electric motor and battery system which replaces the engine and gives a range of 93 miles on a full charge. Peugeot and Citroen’s models cost less than the Mitsubishi, but feature different bumpers and a stability control system to boost safety. Running costs are small, but the purchase price is very high.

Peugeot claims that a full charge of the batteries gives a range of 93 miles and costs around £2 in electricity. Peugeot dealers will have quick chargers, which can give an 80 per cent charge in 30 minutes. Electric car drivers also benefit from no fuel charges, and parking, the London Congestion Charge and road tax are all free. An eight-year warranty is also included.

The iOn is quick off the mark and superb around town

The iOn is essentially a rebadged version of the Mitsubishi i-MiEV, a car which was conceived with the congested streets of Tokyo in mind. Thanks to the fact that an electric car delivers all of its torque as soon as you press the accelerator, it’s very quick off the mark and easily keeps up with city traffic. You feel the extra weight of the batteries, but they’re mounted low, under the floor, which means that body roll is minimal. The brakes are powerful too, as they’re aided by the motor as it regenerates power back to the batteries. The iOn only has one gear, so it’s even smoother to drive than the best automatic gearboxes.

Four people can travel in comfort on short journeys

As it’s electric powered, the iOn is very quiet off the mark, but tyre roar and a high-pitched whirr from the motor are noticeable as you build up speed. The iOn is narrow but tall, meaning that there’s plenty of headroom for adults, although larger rear-seat passengers will rub shoulders. The driving position is good, with the large windscreen giving an excellent view of the road ahead. One of the few options is a cold package, which adds a heated driver’s seat and heated wing mirrors.

The iOn is very much an urban car, and Peugeot expects it to be used by a single driver, or driver and passenger. The rear seats can accommodate adults on short journeys, and, despite the fact that the electric motor is mounted under the boot floor, the 166-litre boot is big enough for three or four bags of grocery shopping. There’s no parcel shelf, and the rear seats split and fold flat with ease, giving enough room for a week’s trip to the supermarket.

Peugeot has differentiated the iOn from the i-MiEV by adding a electronic stability control system for extra safety. The iOn, i-MiEV and Citroen C-Zero became the first electric cars to be subjected to the Euro NCAP crash test in February 2011, all scoring four out of five stars. Six airbags are fitted as standard too. As it’s powered by a simple motor with a single gear in the gearbox, the iOn has less to go wrong than a conventionally-powered car in terms of moving parts.

As with all new technology there’s a price to pay for being the first to adopt it. In the iOn’s case, that means a list price on a par with a top of the range Audi A4 or BMW 3 Series, and that's including the Government's £4,500 electric car grant. However, Peugeot admits that very few private buyers will purchase the car, instead opting to lease it for £415 per month plus VAT, which includes a four-year warranty. There’s just one trim level, which includes plenty of equipment, although satellite navigation (£260) and metallic paint (£420) are optional extras.

See how the Peugeot iOn scores on our sister site DrivingElectric.