The gap between the 911 Coupe and Cabriolet is shrinking, but the McLaren 570S Spider is even more precise 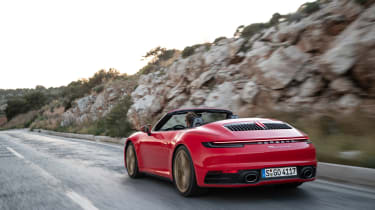 Very few cars are truly great from the outset, and the Porsche 911 is the ultimate example of evolution enhancing the breed. Now in its eighth '992' generation, the latest Cabriolet shares quite a bit with its predecessor, but has all-new bodywork. It's slightly bigger and a touch heavier too, but its extra width improves grip and Porsche has paid a lot of attention to making the Cabriolet's shell as stiff as possible.

On the move, only the smallest traces of vibration can be detected from the lack of a fixed roof, and with the soft-top up, refinement is excellent. The 911 is a sharp tool, but one that comes in two distinct flavours from launch. With rear-wheel drive, the Carrera S is more playful, kicking its tail out under hard acceleration out of slippery corners, but never in the scary way some old Porsches did. The Carrera 4S uses advanced four-wheel drive to find traction, even in poor conditions, giving it a more unflappable feel. 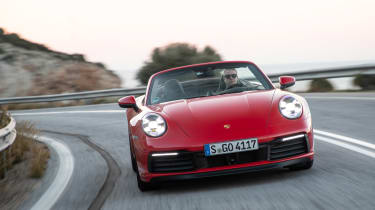 Even the standard steel brakes have lots of bite and feel through the pedal, while the steering is a revelation. Porsche has clearly mastered the art of tuning electric steering, because it's feelsome and perfectly weighted, as well as accurate. Every 911 comes with adaptive suspension, but upgrades include a PASM setup with stiffer suspension and a 10mm lower ride height, rear-wheel steering and active engine mounts that reduce the twisting effect of the engine under hard acceleration.

The 3.0-litre flat-six with twin turbochargers might sound familiar, but it's been given a thorough reworking for the 992. Larger turbos, new fuel injectors and enhanced air intakes increase power to 444bhp - an impressive 30bhp more than before. It's enough to propel the Carrera S from 0-62mph in 3.9 seconds and the 4S in 3.8 seconds, while the optional Sport Chrono Package reduces both times by a further 0.2 seconds thanks to its launch control system. That's incredibly quick, so it's hard to believe GTS and Turbo versions are even faster.

The Carrera S engine relishes being worked hard, taking on a harder-edged character as the rev needle passes 6,000rpm. There's no missing the fact it's turbocharged either, with plenty of whooshing sounds and chirps, which are more easily heard in the Cabriolet than the coupe. Flick the new gearbox into its manual mode and it's possible to change gears with almost no hesitation. If you don't need to go quite so quickly, there's also the standard Carrera version with 380bhp and the same choice of front- or four-wheel drive. It's still far faster than almost all other cars on the road, but costs around £12,000 less than the S version.

At the other end of the range, there's the Turbo S Cabriolet, with a brand new 3.8-litre twin-turbo engine producing 641bhp. This gets from 0-62mph in just 2.7 seconds, making it faster than some supercars. Yet, in typical Porsche fashion, it's remarkably easy to drive quickly.