The Porsche Panamera is incredibly quick and enjoyable to drive, whichever engine you choose

The Porsche Panamera is built to go fast and does so with aplomb. Every engine configuration offers more power than you’re ever likely to need, yet despite its prodigious performance, the Panamera isn’t intimidating or difficult to drive. True, its size means parking is tricky (though made easier if you specify the optional reversing camera), and it can feel too big for narrow roads, but the Panamera is ridiculously fast in a straight line.

Winding B-roads reveal the Panamera is easier to place on the road than its dimensions might suggest, but the thud of cat's eyes will remind you it's a wide car. Meanwhile, motorway cruising is effortless. Overtaking can be accomplished almost instantaneously, while the four-wheel-drive system provides enormous amounts of traction. 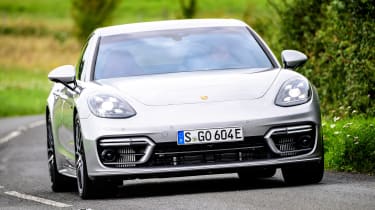 A worthwhile upgrade is Porsche’s adaptive air suspension system (PASM). This can vary the stiffness of the suspension, but we found that even in its softest setting it helped to keep the Panamera remarkably composed while giving it an incredibly comfortable ride. One criticism we have of some models in the range is that we’d like more feel from the steering – it’s one of the few things that can prevent the Panamera feeling like a true sports car.

However, move up to the GTS, with its 'Sports' chassis that's lowered by 10mm and equipped with stiffer anti-roll bars, and there’s little to complain about. The suspension software is tweaked, and the result is a car that conceals its vast two-tonne weight to respond immediately when you point the Panamera into a corner. With almost endless grip as the four-wheel drive and huge tyres work together, you're simply encouraged to drive harder. There are few four-seat cars that are quite as capable around a track as a Panamera GTS, and it feels like the enthusiast's choice within the range.

Every Panamera uses an eight-speed, dual-clutch PDK automatic gearbox rather than the old-fashioned conventional type found in the previous model and it’s very quick-shifting for the most part. However, we did feel the occasional knock when it struggled to choose the right gear in stop-start traffic.

The entry-level Porsche Panamera and Panamera 4 come with a six-cylinder 2.9-litre turbocharged petrol developing 326bhp, enough to take the car from 0-62mph in 5.6 seconds, or 5.3 seconds with the extra traction of four-wheel drive.

A bigger, 4.0-litre turbocharged V8 engine is fitted to the GTS, and its 473bhp brings the 0-62mph time down to 3.9 seconds. If that’s not fast enough, the same engine is turned up to 621bhp for the Turbo S model, which takes just 3.1 seconds to roar from 0-62mph and goes on to a top speed of 196mph. It's incredibly impressive, but the sheer performance of the Turbo S feels somewhat wasted on narrow, congested British roads, because it's so rare you can use it. Even when trying to drive slowly around town, a mere brush of the throttle has the Turbo S lunging towards 40mph, with almost no lag from the twin-turbo engine. Another slight criticism is that the suspension has to be stiffer to deal with all this performance, making it quite firm on rough roads. 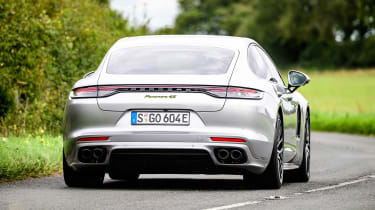 There’s something about the Porsche Panamera 4S E-Hybrid that doesn’t quite compute – and we mean that in a good way. The 3.7 seconds it takes to go from 0-62mph seems at odds with its claimed fuel economy and low BiK band. You can run the 4S E-Hybrid on battery power alone at speeds up to 87mph for around 35 miles, while a mode switch allows you to save their charge for later, or use them together with the petrol engine for maximum performance, should you wish.

Recharging the batteries is taken care of either by surplus energy from the engine (something called E-Charge mode) or home charging with a three-pin domestic plug, which will fill them from empty in six hours or so – although if you have a 32-amp power supply at home, this will take three-and-a-half hours to do the same job. E-Hold mode lets you save the battery for when you reach a low-emissions zone. We found Hybrid Auto mode to give the best compromise of efficiency and power and it seemed to preserve the all-electric range pretty well, too.

The best news is that the E-Hybrid’s acceleration is immediate when you put your foot down and nothing suggests you’re behind the wheel of anything other than a seriously powerful petrol car. In electric mode, there's just a faint whine if you ask for full acceleration, and in Hybrid mode the petrol engine will cut in quickly and smoothly to pile on more forward thrust.

It has a tougher job convincing the driver it's up to Porsche's usual standards on more challenging UK roads, where it struggles to disguise its 2,200kg bulk. Body lean is still kept in check, but you can feel its momentum and size if you try to push too hard. The 4S E-Hybrid could also do with a better soundtrack, because a lot of the time there's nothing but a distant hum or drone from the electric motor to accompany the view out of the windscreen.