The Renault Megane RS is precise, responsive and surprisingly comfortable – not to mention fast

The 'entry-level' Megane RS model is the Sport  and is all the hot hatchback most enthusiastic drivers will ever need. If your tastes favour a more extreme setup, though, a stiffer Cup version is available, as well as a more powerful RS 300 Trophy with upgraded brakes to complement the extra 20bhp. The hardcore RS Trophy-R is the quickest, lightest and most expensive model in the Megane RS range. 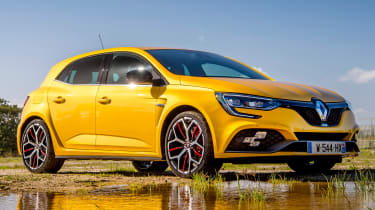 One of the key features of the normal Megane hatchback is its soft, comfortable ride. With its big 19-inch alloy wheels and low-profile tyres, the RS is more prone to crashing through potholes, with the front tyres jiggling on uneven road surfaces at low speeds. Up the pace, though, and the RS still manages to soothe over motorway bumps. Given a long trip on a major road, you'll be hard-pressed to notice much difference between the RS and an Expression+, aside from a little more interior noise.

If you decide to return from your destination on more challenging roads, though, the changes are plain to feel. A hi-tech touch is the 4CONTROL four-wheel-steering system, which makes the car noticeably more agile. With the front and rear wheels turning in opposite directions at below 62mph, the RS is very eager in corners and a doddle to park in tight spaces. Speed up and the rear-wheel steering neutralises before beginning to steer the same way as the front wheels at motorway speeds to improve stability when changing lanes or overtaking. While the Trophy keeps the rear wheel steering, the Trophy-R goes without it, instead using a rear axle that was developed especially. 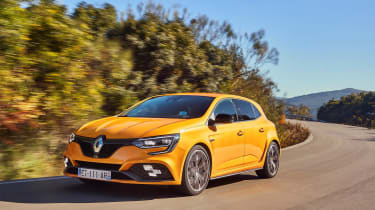 The steering feels a little strange at first and there's never a huge amount of feedback at the wheel, but there's no doubting its precision – the car responds immediately with very little input and turns into corners eagerly. With such accuracy at your fingertips, you're also well placed to deal with the inevitable scrabbling when you deploy full power in a corner – despite 'torque vectoring' you can still sense that the tyres have a lot to deal with, but it's instinctive to turn the wheel a little further to ensure power gets to the road.

The Cup package deals with the power in neater fashion thanks to a proper limited-slip differential, which apportions the power to whichever wheel is best placed to deal with it. Steering at full power feels more satisfying as a result. The Cup's suspension is 10% stiffer, too, reducing body lean from minimal to negligible. The Trophy-R’s differential and added throttle offers even tighter cornering and incredible composure at higher speeds.

Devotees will say that the Cup version really is what an RS Megane should be. However, we reckon opting for the Cup or, indeed, the RS Trophy, offers more in bragging rights than actual value. The Trophy-R will be bought by both the most ardent Megane RS fans because of its high list price and hardcore nature. Most drivers will find the standard Sport offers as much hot-hatch fun as you could ask for. That's unless you're serious about track days, in which case the larger brakes and optional lightweight 19-inch wheels and sticky tyres of the Trophy mean it can be driven more quickly and at the limit for longer.

Any Megane RS really is a car that relishes speed and feels more natural, better balanced and more nimble the faster you go – but not all drivers will find this appealing. By contrast, the Honda Civic Type-R can supply real driving fun even at low speeds, so you can enjoy yourself without putting your driving license at risk.

The Megane RS uses the same 1.8-litre, 276bhp turbocharged petrol engine as the Alpine A110 sports car. However, unlike that lithe two-seater, the Megane weighs some 1,430kg – more than the Honda Civic Type R. Yet, with 40bhp less than the Honda, it's only a tenth of a second slower from 0-62mph, with a time of 5.8 seconds.

A more powerful 296bhp Trophy is also available, gaining its extra 20bhp from a reprogrammed engine control unit and a turbocharger fettled to suit. The car also benefits from a less restrictive exhaust system with a valve to enhance noise when you want it. The RS 300 Trophy only shaves a tenth of a second from the 'regular' RS' 0-62mph time, but the extra power makes its presence felt when overtaking and on track.

The Trophy-R doesn’t have any more power but it does weigh 130kg less and has a new rear suspension setup. This means the RS-Trophy is three tenths of a second faster from 0-62mph, completing it in 5.4 seconds.

In a controversial move, Renault has employed a sound generator to pump engine noise through the car's stereo speakers – we're not entirely convinced about its authenticity. Changing down through the gears quickly will trigger pops and bangs from the exhaust in simulated motorsport style, but this can't disguise the fact that the RS engine isn't especially keen to rev to its limit.

The six-speed dual-clutch automatic feels perfectly suited to the RS. Operated by steering-column paddles, it reacts immediately and can skip certain gears if you instruct it to by holding the relevant paddle back when in Race or Sport mode. Our only criticism is that the paddle is a little mushy and unsatisfying in feel.

Many enthusiasts will plump for the manual option, but might regret the decision if they do a lot of town driving. The clutch feels rather heavy when ambling around at low speeds and contrasts with the very light, if slightly imprecise, gearchange action. However, its weight is perfect for energetic, lightning-fast gearshifts when you're pressing on; those with nimble feet will find the pedals placed well to blip the accelerator before a down-change. Arguably, it's this great set-up that best exemplifies the motorsport breeding of the Megane RS.