There are bigger load luggers, but the Renault Megane Sport Tourer is a very useful all-rounder

It’s when you look at the boot of the Megane Sport Tourer that you realise why it was given this name rather than simply being called an Estate. It offers a useful increase in load space over the hatchback, but is far from being a beast of burden. However, the Sport Tourer is still a pretty versatile car and is ideally suited to family holidays or leisure activities. 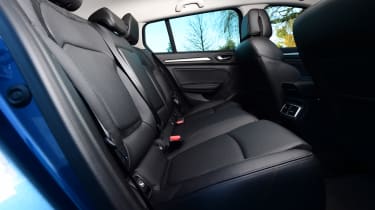 That beautifully designed dashboard is well shaped and allows plenty of legroom for driver and passenger alike, while headroom is as you’d expect in a comfortable family hatchback.

Passengers in the back are treated to legroom claimed to be among the best in its class, while the rear seatback has been angled to encourage a better posture than the slumped pose that occupants in the back of the previous model were forced to adopt. Nobody is likely to feel constricted in either the front or rear seats.

All models have a front centre armrest with storage space beneath, as well as cup-holders built in. Each door has a cup-holder, too, and you can just about fit a water bottle in the glovebox. 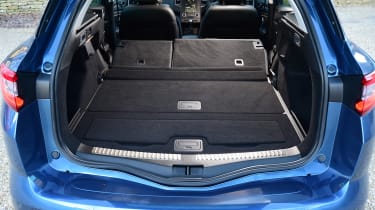 While it may not be fighting for the overall spoils of best boot in the business, the Megane Sport Touring aims to provide more luggage space than the hatchback, which offers 384 litres. As you’d expect, the Sport Tourer well and truly trounces that with 521 litres in total.

Its boot is well designed, too. It’s easy to access and the load floor is completely flat when the rear seats are folded down which, incidentally, brings overall load space up to a considerable 1,433 litres, and at 2.77 metres, the Megane’s load area is the longest in the class.

There’s a low loading lip, too, which heavy items are easily lifted over. You’ll find another compartment under a false floor, or this section can be lowered to increase the effective height of the boot. There are also load-securing hooks and storage bins at each side.

Whatever Renault calls it, the Sport Tourer is still technically an estate car, and it can’t compete with the 640-litre boot of the Skoda Octavia Estate, which transforms into a sofa-swallowing area with the seatbacks folded. The Sport Tourer isn’t a car for regularly carrying really bulky loads, but then again if you want a stylish touring car, the Octavia probably wouldn’t be your first choice, either.

All models can now tow a braked trailer weighing up to 1,700kg, so a Megane Sport Tourer should be able to tow a larger caravan without any problems.