The Renault Megane Sport Tourer is comfortable, but it doesn’t engage like some rivals

The Megane Sport Tourer doesn’t wander very far from the driving experience provided by its hatchback sibling. It uses the same petrol and diesel engines and, although it’s a slightly bigger, heavier car, the differences in performance are marginal. Also, since the hatchback can’t claim to offer the most razor-sharp responses in its class, the ST’s bulkier body does little to negatively affect the driving experience.

This isn’t a criticism, though. Although it’s seen as something to celebrate when a car can truly reward an enthusiastic driver, responsive steering and lean-free cornering can sometimes come at the cost of passenger comfort – and this is something the Sport Tourer serves up in generous helpings. Indeed, for much of the time, when a car is merely carrying a family and its baggage in fuss-free safety, sportiness doesn’t really come into it. We assume the name Sport Tourer refers to the car’s ability to haul bulky lifestyle accessories, like bicycles and climbing gear, rather than any racetrack prowess.

It’s fair to say that both the Ford Focus Estate and SEAT Leon ST are more able to satisfy demanding drivers, though. The steering of the Renault is slightly too light to suit spirited driving and feels rather vague in small movements – it can be tightened up a bit if you use the Sport driving mode, but the changes feel artificial and don’t achieve a lot. It leans a bit more in corners than a Focus, too. 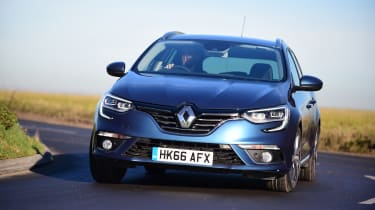 We found the six-speed manual gearbox easy to use, although it can’t match the slickness of the VW Group transmission used by the SEAT Leon and Skoda Octavia. The clutch pedal is well weighted, though and doesn’t incite fatigue like on some manual cars.

The dCi 115 diesel has a sluggish 11.4-second 0-62mph time, so you’ll probably miss the extra performance of a bigger engine. However, if you cover high mileage but spend a lot of your time in congested areas, you may find it suits just fine. The six-speed automatic actually manages 0-62mph half a second quicker and doesn’t dent fuel economy too badly.

The 1.2-litre TCe 140 petrol won’t set the world on fire with its on-paper performance – 0-62mph takes 9.8 seconds as a manual or a whisker slower in seven-speed automatic form. But most drivers will find that this engine is perfectly fine for everyday driving. Being turbocharged, there’s plenty of power when you need it for overtaking and it’s a far quieter engine than either of the diesels.