"The SEAT Leon Estate has grown to offer more space, while remaining stylish and good to drive” 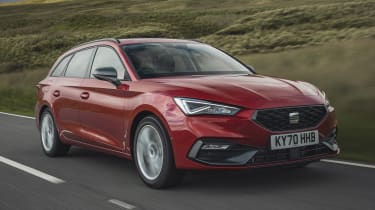 The popularity of traditional, large estate cars has declined in recent years, thanks largely to the rise of the SUV but also because of estates based on smaller hatchbacks, such as the SEAT Leon Estate. A family hatchback makes a good starting point because these big sellers already have efficient engines, decent driving characteristics and are often good value for money.

They also sit on flexible underpinnings that can easily be stretched to create a longer car, as is the case here. Adding 93mm between the wheels has given the Leon Estate more passenger and luggage room than ever before. Its 620-litre boot is also just a bit bigger than buyers will find in the Ford Focus Estate, even if it can't quite match the giant luggage volume of the Skoda Octavia Estate. With sleek looks, the Leon Estate has always traded a few litres of boot volume for more dramatic exterior styling.

The interior looks modern and attractive too, with jutting air vents and an excellent driving position. There's also been a significant increase in technology, thanks to a larger infotainment screen, which is now perched above the dashboard, and a digital instrument cluster. The touch-sensitive slider for the climate controls may be a step too far, though, proving fiddly to use on the move and a magnet for smudges. 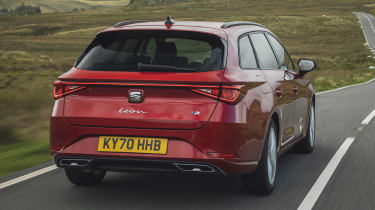 Diesel isn't currently offered in the Leon Estate, so buyers will need to pick from a 1.5-litre TSi petrol with either 128bhp or 148bhp, or plump for the first Leon Estate plug-in hybrid. Badged e-Hybrid, this gets a 1.4-litre petrol engine, electric motor and battery for a total of 201bhp and a 38-mile electric range. The petrol is able to manage around 50mpg according to official figures, while the e-Hybrid can top 200mpg if its battery is frequently topped up.

Overall, the Leon Estate is an accomplished alternative to a small SUV, with plenty of style and space in a large boot. FR versions are fun to drive but sacrifice some ride quality, and while technology has improved, it's a shame some materials feel a bit cheap. You may prefer the styling or the way the SEAT drives but the Skoda Octavia Estate feels more upmarket.

The Leon Estate is offered with a range of efficient petrol, mild-hybrid and plug-in hybrid engines to keep running costs and CO2 emissions down. Unlike the hatchback, however, the 1.0-litre petrol isn't available; presumably because it isn't deemed powerful enough for the load-lugging ability estate owners tend to need. The 2.0-litre diesel has also been left out of the lineup.

With 128bhp and a manual gearbox, the 1.5-litre petrol can return up to 51.4mpg, while CO2 emissions of 125g/km place it in a reasonable Benefit-in-Kind (BiK) band for company-car drivers. This engine with 20bhp more power can still return up to 48.7mpg, with or without a DSG automatic gearbox. The latter gets mild-hybrid technology to help it keep running costs down, allowing the engine to shut down while coasting and waiting in traffic. 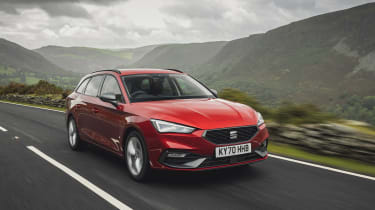 For the first time ever in the Leon, there's also the option of a plug-in hybrid powertrain. Shared with the Skoda Octavia Estate iV, it combines a 1.4-litre petrol engine and an electric motor with a 12.8kWh battery. This gives the Leon Estate an electric range of up to 38 miles (two miles less than the hatchback) from a full charge. Topping up the battery from flat to 100% takes just over 3.5 hours using a 3.6kW wallbox.

Thanks to its ability to cover most commutes without troubling the combustion engine, official economy figures soar to 235mpg with emissions of 27-30g/km. How much fuel you use will of course depend entirely on how you use the car; longer trips or an empty battery will see much lower economy figures. Business users stand to benefit the most thanks to its low BiK band, while tax is also reduced to £140 per year.

Smooth performance but with a firm ride in FR trims

The SEAT Leon Estate is based on the same MQB platform as before but it’s now stretched so there's almost 10cm more bodywork between the front and rear wheels. It feels similar to drive, though, with relatively sharp responses for a car with such a big boot. 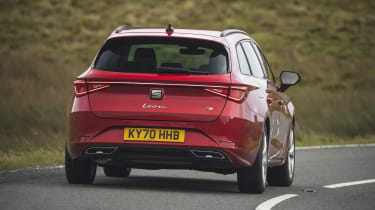 So far we've tried the 1.5-litre eTSI mild-hybrid, which is only available with a seven-speed DSG automatic gearbox. Thanks to its 48-volt electric starter generator and small lithium-ion battery, it can coast with the engine off to improve efficiency. The setup can also give the engine a small helping hand when you accelerate, but it's very subtle and the car can't drive using electricity alone.

It's a smooth engine, with enough performance when you need to overtake or power onto a motorway, but it can drone slightly at higher revs. The 0-62mph run takes 8.7 seconds, which is 0.2 seconds quicker than the same engine without mild-hybrid tech and a manual gearbox. The 1.5-litre is also available with 128bhp and a manual, taking 9.7 seconds to reach 62mph from rest. 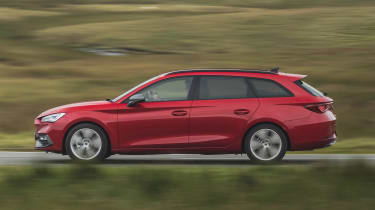 The firmer suspension fitted in the FR trim keeps body lean in check, giving the Leon Estate a sporty and accurate feel, but even with 17-inch alloy wheels fitted, the ride never really settles and there's pronounced road noise on some surfaces.

With a combined 201bhp from its 1.4-litre petrol engine and electric motor, the Leon Estate e-Hybrid is the most powerful and quickest Leon until high-performance versions arrive. It can get from 0-62mph in 7.7 seconds. When we tried the hatchback version, we found the plug-in hybrid impressively smooth at switching between its electric and petrol motor.

Technology gets an upgrade but some materials feel slightly cheap

As you'd expect, the Leon Estate's dashboard has been lifted straight from the hatch, so it gets the same upgrades in technology and attractive design, but also the same gripes. Some of the plastics are cheaper than you may expect; perhaps surprisingly, the Skoda Octavia Estate feels more upmarket inside. 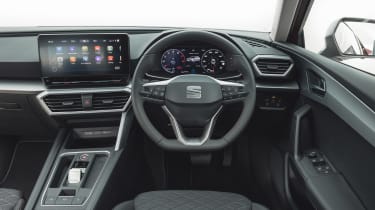 Thanks to the increase in the Leon Estate's length, there's an abundance of space inside. Front seat passengers are as well accommodated as you'd expect, and there's lots of adjustment for the driver's seat and steering wheel. The rear seats also offer decent room for two adults, making it a flexible SUV-alternative for families. 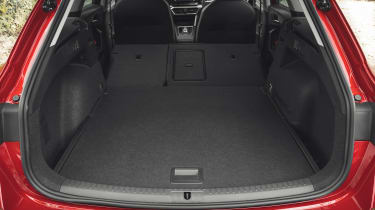 Boot space sees a significant increase too, jumping to 620 litres behind the rear seats in the 1.5-litre TSI petrol versions. That's more than the 608 litres the Ford Focus Estate can manage but the Skoda Octavia Estate is even bigger, with 640 litres on offer. Because of the extra space required for its battery, the Leon Estate e-Hybrid has a smaller, 470-litre boot. However, that's still 90 litres larger than the boot in the Leon hatchback, so we think it will be big enough for many families.

While it looks entirely different inside and out, the latest Leon is still based on an evolution of the building blocks found under the previous model, the same one used for the Volkswagen Golf, Skoda Octavia and Audi A3. All this means reliability should be good, and the old Leon came a respectable 31st out of the top 75 models in our 2020 Driver Power survey. Just over 17% of owners reported a fault within the first year, with electrical gremlins the most common issue. 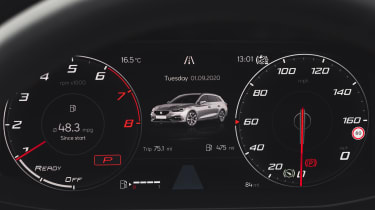 Safety kit has been bolstered with more advanced technology, including 'Car2X' communication that can flag up local traffic issues and accidents, even sharing information between other cars. The Leon is also fitted with adaptive cruise control and autonomous emergency braking, and safety can be further increased with optional Safety and Driving Packs. While the latest Leon hasn't been tested by Euro NCAP yet, we expect it to obtain a similar five-star score to the Volkswagen Golf. 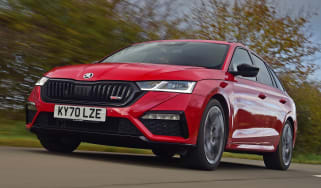 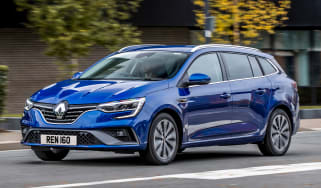 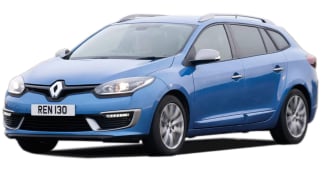