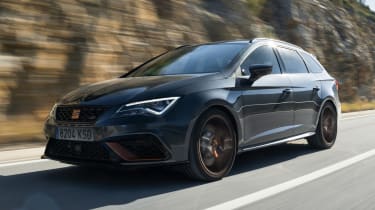 The SEAT Leon ST Cupra R is very likely to be the fastest version of SEAT's small estate to ever come with a manufacturer’s warranty. It has been designed for hardcore fans of the Cupra model who think the standard car could use some extra power and exclusivity. 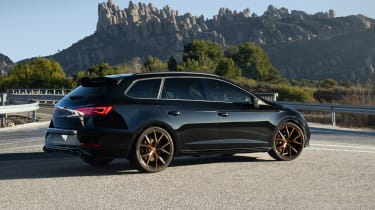 Just 150 are being sold in the UK, and those who do sign on the dotted line will be treated to a hot estate that's more fun to drive than the Volkswagen Golf R Estate, but also slightly more costly. Both share the same 296bhp 2.0-litre turbocharged petrol engine, which sends its power to all four wheels to avoid overwhelming the front tyres. Acceleration is easy thanks to a rapid-fire seven-speed automatic gearbox and launch control, which together can get the Cupra R from 0-62mph in 4.9 seconds. Top speed is limited to 155mph.

That’s not the end of the story because, for an extra £500, an upgrade from performance firm ABT increases power to 365bhp without invalidating the car’s warranty. The ST Cupra R comes with some other unique features too, including suspension that adds a few degrees of camber angle to the wheels so that they lean outwards like a racing car. 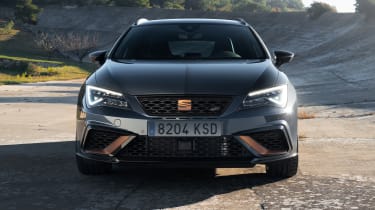 The ST Cupra R has grippy Michelin tyres designed for performance driving and track days, and the front brakes have been upgraded for the same purpose. Meanwhile, as well as adding a dose of attitude, the carbon front splitter, rear bumper diffuser and bigger rear spoiler are said to produce extra downforce at higher speeds.

Running costs aren't terrible given the performance on offer

Officially, the SEAT Leon ST Cupra R returns 33.6mpg, which is fairly reasonable for such a rapid machine. And indeed, in its most economical driving mode, the Leon's automatic gearbox will shuffle through the gears to keep revs low, enable stop-start in traffic and allow plenty of throttle travel before the engine wakes up. SEAT's 4Drive four-wheel drive system sends power to the front wheels only in ordinary driving in order to save fuel. 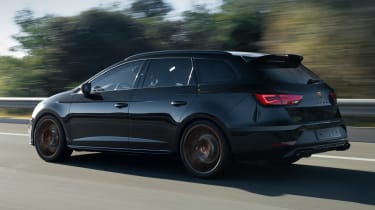 Change into a sporty driving mode or put your foot down, and the above economy figure will vanish before your eyes as large fuel injectors and the turbocharger cram the engine with fuel and air.

The SEAT Leon ST Cupra R is great to drive

To really experience the Leon ST Cupra R's advantage over the Volkswagen Golf R Estate, you have to tick the box for ABT's £500 tuning upgrade. This software change leaves the warranty intact but increases power from 296bhp to 365bhp, which is around three times as much as an entry-level Leon.

The power hike from the car’s 2.0-litre turbo petrol engine is significant, but anyone who's driven a standard ST Cupra or Golf R will know the chassis feels more than capable of handling some extra power. That's mainly thanks to its four-wheel drive system, which seamlessly shuffles power to the wheels with most grip, and an automatic gearbox that makes changing gear effortless. The ST Cupra R’s 0-62mph time is cut from 4.9 to 4.5 seconds with the ABT kit fitted, and we'd expect all the 150 buyers to go for it.

Along a dry road, the new suspension and tyres provide incredible levels of grip, while the engine offers unbelievable acceleration. The fact it sounds great adds to the enjoyment, while the upgraded brakes give confidence that the power on offer is matched with great stopping ability. 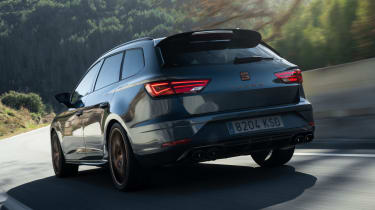 Our only gripe is that while the gearbox excels at quick upshifts when accelerating, it can be a bit lethargic at other times, particularly when pulling away from slow rolling starts. A manual gearbox might make the car slightly slower from 0-62mph but it would be more engaging.

Considering the ST Cupra R's hardcore nature and small production run, one of the biggest surprises is how comfortable it feels. Bumps are soaked up competently by the adaptive suspension, even in its firmer mode, while the comfort setting softens it further for relaxed town and motorway driving. 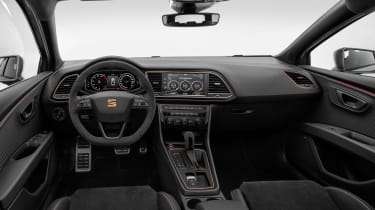 Once inside the car, you're greeted by illuminated door sills, a new fabric for the inside of the doors that mimics carbon fibre, and copper accents for the air vents, centre console and even the stitching for the steering wheel and bucket seats. The steering wheel and gearstick are finished in motorsport-inspired Alcantara that looks and feels fantastic.

This is a performance car that can carry the family, its luggage and the dog in comfort

Rather like the best hot hatchbacks, one great thing about the Leon ST Cupra R is that it's no less practical than the standard model. it might be a bit of a squeeze for five adults, but four people can sit in comfort with 587-litres of luggage space behind them in the boot. A sloping rear window means the boxy Skoda Octavia vRS Estate (610 litres) and Volkswagen Golf R Estate (605 litres) offer slightly more, but most people are unlikely to notice. 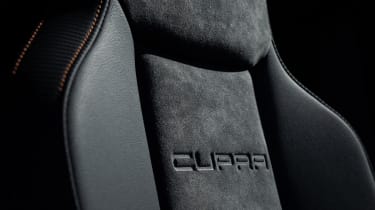 Aside from space, there's also plenty of handy everyday features like cup holders and even hooks for shopping bags - proof that the Leon was designed as a practical car first and evolved into this sporty version later.

After a few years on sale, the regular SEAT Leon has proved reliable

The Leon's popular underpinnings mean we can confidently say it should prove very reliable. In standard form, it was ranked 47th out of the top 75 cars on sale in the UK by respondents to our 2018 Driver Power survey. Around 12% of Leon owners told us they'd experienced one or more faults within the first 12 months, with the few issues that crop up most likely caused by the electrics or transmission. 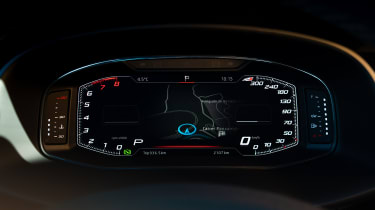 Safety shouldn't cause much concern either, thanks to a five-star score from Euro NCAP. The Leon received an impressive 94% rating in the adult occupant protection category as part of the tests.