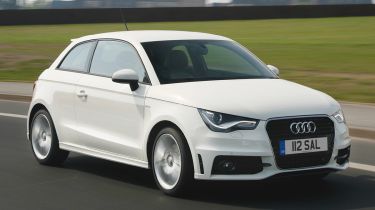 The sporty Audi A1 S line has a firmer suspension than both the SE and Sport trims – giving the car sharper handling thanks to the fact it leans less in the corners. A bodykit, which includes sports bumpers, side skirts and a roof spoiler, gives the A1 a much more aggressive look. It also comes with 17 inch alloy wheels.

There is some extra equipment inside the car too, including a leather steering wheel, part leather seats, and an interior LED light package.

Petrol engine options include an 85 bhp 1.2-litre, and either a 120bhp or 138bhp 1.4-litre. The last in that list will manage 0-60mph in just 7.9 seconds - giving it impressive performance and making it a rival to the new MINI Cooper. If you prefer diesel there is a 1.6-litre TDI and a 2.0-litre TDI, with the smaller engine providing the best fuel economy in the range.

The S tronic version, which has a semi-automatic gearbox, can be equipped with the higher powered petrol engines.

You won’t find a supermini with a better interior than the Audi A1. The quality of the cabin makes it feel like an expensive saloon car, rather than a small hatchback. It’s stylish outside too, and the S Line bodykit certainly helps give the A1 a sportier image, without spoiling the car’s looks.There is a wide range of engines to choose from, so you should have no problem in finding one that suits you. The A1’s diesel engines are impressively smooth and quiet, and offer a great balance between performance and fuel economy.Compared to its class rivals, such as the Alfa Romeo Mito, the Audi A1’s premium badge means that it will hold its value well.

Although the Audi A1’s stiff suspension setup improves the car's handling, the downside is that the ride is a bit too firm. As a result, the Audi A1 doesn’t glide over bumps and potholes like a luxurious supermini should – and this is a problem made worse by the S line's even stiffer sports suspension, which further compromises comfort. Even with the more nimble handling, we still think that the MINI Cooper is more fun to drive than the Audi A1 S Line.No other supermini gets close to the A1’s levels of luxury and quality, but it is extremely pricey. There are some very good premium superminis, such as the Volkswagen Polo, that are much more affordable.

The 1.4-litre TFSI petrol engine gives the Audi A1 S Line the performance to match its sporty looks and handling, while not being too expensive to run.