"The Audi A4 Allroad offers some genuine off-road ability without the running costs and proportions of a traditional 4x4."

The Audi A4 Allroad is a more rugged version of the Audi A4 Avant. It's aimed at those who need some off-road ability but don’t want or need a ‘proper’ 4x4 that’s likely to be much bigger and more expensive to run.

The car is similar to the standard Audi A4 Avant estate with the added practicality of raised suspension, four-wheel drive and protective bodywork for off-road driving. The Allroad isn’t quite as sharp to drive on tarmac as the standard car on which it’s based, but you’d need to drive both back-to-back to tell. At any rate, it’s a small trade-off for the extra comfort of the raised, softer suspension and the car’s off-road ability.

And thanks to the car’s off-road detection system, even complete off-road novices will be able to make best use of its grip. But don’t expect the Allroad to cover the same terrain as a Land Rover Discovery – it's at its best towing a horse box across a muddy field. 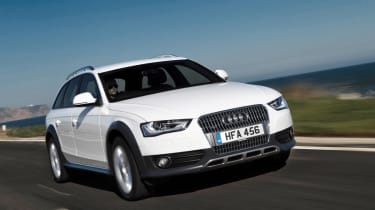 The Allroad only comes as an estate and with a choice of three engines. There's one petrol and two diesels, with the 3.0-litre TDI diesel offering the most power. There are just two trim levels, meaning even the basic standard model comes loaded with equipment – which it should given the car’s relatively high starting price.

The standard A4 Allroad is based on the A4 Avant SE, but there’s also the rather incongruously named A4 Allroad Sport model for around an extra £2,500.

Neither BMW nor Mercedes has a direct competitor for the Allroad, but the Subaru Outback, Volvo XC70 and Volkswagen Passat Alltrack all follow a similar concept. They can't quite match the Audi for sophisticated image and badge appeal, however.

Unless you really want the extra pace of the petrol or larger diesel engine, we’d recommend the A4 Allroad 2.0-litre TDI. It’s the most economical of the three models, yet with 175bhp, it still packs plenty of punch for motorway driving, tackling tracks off-road or towing a trailer or caravan.