Diesel engines in the Audi A5 Sportback have impressive fuel economy

The Audi A5 Sportback is available with two different petrol engines and four diesels. Happily, every engine in the range offers good performance and reasonable fuel economy, although as usual the diesels are the most frugal. Audi has maximised efficiency by fitting stop-start technology (which ‘pauses’ the engine when you’re stopped in traffic) to all A5 Sportback models.

Audi A5 Sportback MPG and CO2

The most efficient Audi A5 Sportback is the 2.0-litre TDI Ultra diesel model, which is capable of 67.3mpg and CO2 emissions of 109g/km for an annual road-tax bill of £20. That’s pretty impressive for a car capable of doing 0-62mph in less than 10 seconds, and also trumps the most economical diesel engine available in the A5 Sportback’s newer rival, the BMW 4 Series Gran Coupe.

There are more powerful versions of the same 2.0-litre diesel engine available and we like the blend of performance and efficiency these offer. The 187bhp version has a useful 53bhp more than the Ultra, while its fuel economy only slips slightly to 58.9mpg, with CO2 emissions of 126g/km for road tax of £110 a year. This is the model we recommend, as the extra power gives the car the sporty performance its design suggests, but it won’t cost much more to run. 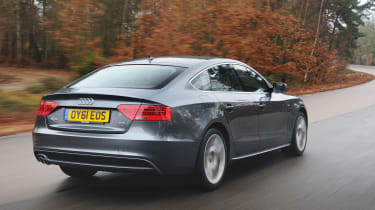 Economy figures for both petrol engines dip below the 50mpg mark, but both make the A5 Sportback very quick, so this is to be expected. The 175bhp version will cost you £145 a year in tax, while the 227bhp model will set you back £185 annually.

The large spectrum of insurance groups in which Audi A5 Sportback models sit reflects the large engine range and different levels of performance on offer. The least powerful and most efficient Ultra model falls into group 23, with the rest of the range sitting between groups 27 and 34. The 2.0-litre diesel model we recommend falls into group 28, which isn’t too bad when you consider its 187bhp power output.

For any of the 2.0-litre engines or smaller, an interim service at an Audi dealer costs £159, while a full service is £309. Servicing the bigger, more powerful 3.0-litre diesel models is slightly more expensive, at £199 and £399 respectively. Audi also offers a fixed-price three-year servicing plan, which you can pay for by monthly direct debit.

Audi offers a three-year/60,000-mile warranty to A5 Sportback buyers, which is similar to the three-year/unlimited-mileage warranty BMW offers on the 4 Series Gran Coupe.