The Audi A5 Sportback is the most practical version of the A5 thanks to its rear doors, large boot and hatchback boot. The car’s sleek interior features plenty of useful storage spaces, too.

Audi has addressed one of the biggest criticisms of the previous A5 Sportback by dumping the old four-seat layout in favour of five chairs, which immediately makes this one of the most practical cars in its range. However, you can only really carry four adults in complete comfort, as the middle rear seat is only suitable for occasional use and not really ideal for longer journeys. Legroom is generally good in the back, though. 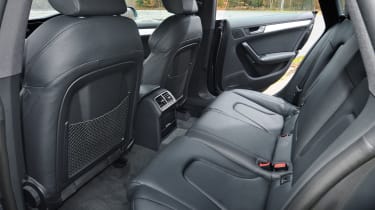 The A5 Sportback is packed full of useful storage spaces, including deep door bins, a large glovebox and numerous cup-holders. Buyers also have the opportunity to dip into the vast options list to add features such as the £180 Storage Pack. This gives you map nets on the front seatbacks, a storage tray under the front seat and a 12v power socket in the boot. 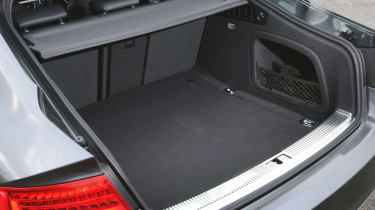 The Audi A5 Sportback comes with a reasonable 480 litres of boot space when the back seats are in place, which expands to a handy 980 litres when they’re folded down flat. Luggage capacity with the seats up is identical to the BMW 4 Series Gran Coupe, but the upward slope of the Audi’s folded seatbacks and a lower roofline means the 980-litre maximum volume is quite a bit smaller than the class-leading BMW’s when the seats are down. The A5 Sportback’s boot opening is wide and easy to load items through, while the shape of the boot also makes it easy to store large, bulky objects.