The Audi A6 Avant is a quiet and accomplished motorway cruiser, especially on the standard suspension

The Audi A6 Avant is at its best cruising along a motorway, which perfectly complements the extra practicality that comes with buying an estate car. It doesn’t feel as agile on windy roads as a BMW 5 Series, with the steering not offering as much feedback as it could, but it’s always reassuring and secure.

It’s an easier car to drive than the old A6, thanks in part to the clever aluminium body, which makes most A6 Avants (except the quattro versions) lighter than rivals such as the Mercedes E-Class Estate.

Unlike those rivals, the standard A6 Avant is only offered with diesel engines, although the S6 Avant performance model features a 444bhp petrol, while the RS6 comes with the same engine tuned to produce 552bhp or 597bhp depending on which version you go for. 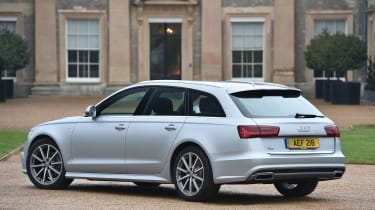 Diesel engines are the mainstay of the A6 Avant range, with 2.0 and 3.0-litre versions of the familiar Audi TDI on offer.

Kicking things off is the 187bhp A6 Avant 2.0-litre TDI Ultra, which is our pick of the range. It has a fairly restrained 0-62mph time of 8.7 seconds, but that drops to 8.5 seconds in models fitted with the excellent (optional) seven-speed automatic gearbox. Both versions have a top speed of 140mph. Although this is the slowest A6 Avant, it’s no slouch, and offers plenty of power for pulling out of junctions and overtaking safely.

Next up is the even smoother 3.0-litre TDI, which develops 215bhp. That extra power cuts the 0-62mph time to 7.3 seconds or (should you choose the four-wheel-drive quattro model over the standard front-wheel-drive version) 6.8 seconds. Both have a top speed of 147mph.

As well as the standard 1.8-litre TFSI petrol offered in the A6, there's the Audi S6 Avant with a massive 4.0-litre turbocharged V8 that produces 444bhp. Its performance is comparable to supercars of 20 years ago, with a 0-62mph time of 4.6 seconds.

The even faster RS6 has the same engine, tuned to produce 552bhp, while the RS6 Performance version costs just under £7,000 extra and has 597bhp. It's blisteringly quick and is capable of 0-62mph in 3.7 seconds. A new sports exhaust introduced in summer of 2016 means the car sounds glorious too.

The RS6 offers incredible punch whenever you want it and, although the steering can sometimes feel too light in corners to give you ultimate confidence, is an extraordinarily fast point-to-point car. The beauty of the RS6 also lies in its versatility; it's very easy to dial back the car's sporty responses so that you're left with an effortlessly fast but comfortable motorway cruiser.