The Audi A6 Ultra diesel model can return up to 64mpg, but general maintenance is pricey

The Audi A6 Avant is now a diesel-only model, reflecting the popularity of diesel engines in the UK. The only exception to this is the Audi S6 performance model, which packs a thirsty 4.0-litre V8 engine.

The Audi A6 Avant range features two diesel engines – a 2.0-litre and a 3.0-litre – in a variety of different versions. That means there’s a wide range of power outputs, each with different MPG and CO2 figures. The 2.0-litre TDI Ultra engine starts the range and is our top pick. That’s largely down to its CO2 emissions of between 114 and 124g/km depending on gearbox type and wheel size. This model also promises to return more than 64mpg fuel economy if you choose the automatic gearbox and drive it carefully. The Ultra is also the only A6 model you can buy with a manual gearbox, but the excellent seven-speed automatic version is both faster and more efficient. 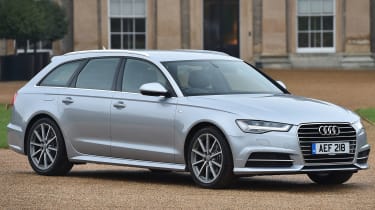 Next up is the 215bhp 3.0-litre TDI. Although it offers a bit more performance, it’s around £6,000 more expensive to buy than the Ultra; it's almost as efficient, but if you choose the quattro four-wheel-drive version, economy drops to around 55mpg.

There's also a 268bhp version of the 3.0-litre TDI, which roughly matches the 215bhp quattro model's CO2 emissions and fuel consumption. That means, depending on the size of wheels you choose, emissions range from 138 to 144g/km, while fuel economy hovers around the 53mpg mark.

Even the top-of-the-range 3.0-litre twin-turbo BiTDI diesel manages to return 45.6mpg and emits 164g/km of CO2, despite the fact that it goes from 0-62mph in 5.2 seconds and has a top speed of 155mph. However, the mind-boggling number is its 740-mile range – meaning you could realistically travel from London to Audi's Ingolstadt headquarters in Germany on a single tank of diesel.

There's also a 1.8-litre petrol engine in the range, as well as the high-performance Audi S6 Avant and the Audi RS6 Avant models. Considering the S6 produces 444bhp, its claimed 30mpg fuel economy and CO2 emissions of 219 to 224g/km aren’t too bad. In top-spec, 597bhp RS6 Performance form, the RS6 claims similar figures, though it would be unwise to rely on coming anywhere close to these figures in the real world.

All A6 Avants attract road tax of at least £140 a year, while those with a list price (including options) of more than £40,000 are liable for an additional surcharge of £310 a year for the first five years of ownership, bringing the annual bill to £450 during that period.

The current A6 Avant's insurance ratings run from group 33 for the entry-level diesel to the maximum 50 for the high-performance RS6. The comparable Mercedes E-Class Estate comes in around group 33 or higher, while the BMW 5 Series Touring starts from group 30 for its less powerful diesels.

General maintenance won’t be particularly cheap, but there's a decent range of fixed-price services. These start from as low as £164 for 2.0-litre models, rising to £199 for the bigger-engined cars.