"The luxurious Bentley Continental Flying Spur is more about being driven, but it's plenty of fun from the driver's seat too." 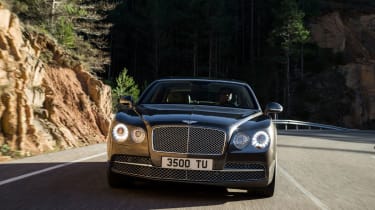 The Bentley Continental Flying Spur saloon is a wheeled contradiction. While its lines are subtle and restrained, the way it drives is anything but. Similarly, although a glossy black Flying Spur might be marketed as the height of discreet good taste, now that the Bentley name has become associated with celebrity and the super-rich, it’s not a car for the attention-shy.

The Flying Spur builds on the appeal of the Bentley Continental coupe, but adds two more doors and a palatial rear seat. You can think of it as a Continental that’s even more indulgent for passengers in the back than for those in the front. However, with even the least powerful engine offering 500bhp, it’s understandable if a Flying Spur’s lucky owner grows increasingly reluctant to pass the keys to the chauffeur.

The Flying Spur is about effortless long-distance motoring rather than responsive handling and although there are high-performance versions available, none of them sacrifice comfort in an attempt to provide driving thrills. So while the range-topping W12 S advertises its 626bhp with a few choice exterior upgrades, the extra power doesn’t make it any less relaxing.

For those who don’t need 626bhp, the regular W12 is available with ‘just’ 616bhp, and there’s a choice of two V8 models. As well as a slight reduction in standard equipment, these versions have a smaller engine with less power, although ‘less’ is relative and the slowest Flying Spur still manages 0-62mph in 5.2 seconds. Of the two V8 models, the more driver-focused is the V8 S, which has a little more power and a chassis tweaked for better feel and response without ruining comfort.

It comes as no surprise that the Flying Spur is an expensive car: it starts at £132,000 for the 4.0-litre V8, while the remarkably popular V8 S costs a little more. The V8 S Black Edition was new to the range in July 2017, offering a menacing blacked-out look in place of the chrome usually fitted. The Black Edition attracts a small price premium over the regular V8 S, there’s then a leap to the full-fat W12 version that costs £158,000. However, the sky’s the limit if you take optional extras and customisation from Bentley’s Mulliner division into account.

All models, especially the W12s, have high running costs, but this is an element of Bentley ownership that seems unlikely to change – and doesn’t seem to affect the public’s appetite for these stunning cars.

Although the Flying Spur’s high fuel consumption is more likely to inconvenience owners because of the frequent stops for fuel rather than the cost of buying it, there’s no escaping the fact that both W12 models are expensive to run, claiming official fuel economy of just 19mpg.

All engines used in the Flying Spur are fitted with cylinder-deactivation technology, which switches half the engine off when full power isn’t required, but both W12 variants still emit a whopping 343g/km CO2.

The V8 models are very slightly more frugal, because they use a smaller engine. The V8 can achieve a claimed 25.9mpg. Its CO2 emissions are significantly lower than the W12’s, too, at 254g/km. If you’re in the enviable position that you can have a Flying Spur as your company car, you can expect a rather less enviable 37% Benefit-in-Kind (BiK) tax bill.

In reality, few will notice any useful reduction in running costs between the W12 and V8 models, but of more note is that the V8s have a far longer range between fill-ups. Distance travelled on one tank increases to around 500 miles from around 400 in the W12 models. It’s handy, too, that the more powerful V8 S model actually posts the exact same fuel economy and CO2 emissions figures as the standard V8.

All Flying Spurs attract the standard road tax of £140 a year plus an additional surcharge of £310 a year for the second to the sixth year of ownership – this is common to all cars with a price tag above £40,000 and brings the annual road tax bill to £450 during that period.

The Flying Spur is an extremely quiet car that handles most roads well, despite its significant bulk. Soft suspension springs make even the roughest roads feel smooth. Of all the versions, we found the V8 S is the best for those who prefer to do the driving themselves, with sharper steering and re-tuned air-suspension settings to give less body lean and a more involving driving experience without too compromise on the comfort front.

The car’s adjustable air suspension setup lacks the ultimate polish of the one in the Mercedes S-Class, something made more obvious if you buy the car with the larger 20 or 21-inch alloy wheels.

It’s wise to remember that this is a 2.5-tonne car, so it won’t exhibit the same reflexes as a supercar of equivalent power. When driven enthusiastically, you’ll be able to feel the weight of the car shifting around behind you and sudden changes in direction will upset the Bentley’s composure. However, while you’d never call it agile, it still responds with remarkable fluidity and control. The Flying Spur remains an extremely satisfying car to drive on challenging roads.

All Bentley Continental Flying Spur models deliver their ample power through a four-wheel-drive system, with most power sent to the rear wheels for traditionally sporting drivingcharacteristics. On S models you can choose an optional ceramic brake system distinguished by red or black painted calipers. The use of fade-resistant ceramic materials ensures that the Bentley stops as well as it accelerates.

Although there’s a noticeable hesitation when you change gear with the eight-speed gearbox and the 6.0-litre engine does sound a little muted, there’s no doubting the firepower available. It’s much faster than the previous-generation car – the 6.0-litre W12 engine produces 616bhp in standard tune, and 626bhp in S form, powering the huge car from 0-62mph in just 4.5 seconds. It also means that the W12 S is the first four-door Bentley capable of doing more than 200mph.

The twin-turbocharged 500bhp V8 is less powerful than the W12, so 0-62mph takes a little longer, at 5.2 seconds. This is still seriously fast, particularly for a car of the Flying Spur's size. To our ears it also makes a more appealing noise and the draw of the V8’s aural signature will attract some buyers with its menacing – although non-intrusive – rumble under hard acceleration.

The V8 S has its power boosted to 521bhp. This extra power over the standard V8 model brings the 0-62mph sprint time down to 4.9 seconds and increases top speed to 190mph.

As well as extra power, the V8 S boasts a sportier setup than the standard V8, meaning it doesn’t lean in corners as much. Ride comfort hasn’t been sacrificed; it just feels more composed when you change direction quickly.

The car’s eight-speed automatic gearbox is clever enough to read the intentions of the driver and will change down through the gears quickly when necessary. Putting it into sports mode blocks top gear and increases the Flying Spur’s eagerness for action. Though all the engines roar when initially provoked, engine noise quickly subsides to become almost imperceptible at speed, and the only commotion to break the tranquillity is those big tyres gripping the road.

The car drives comfortably even on the roughest roads

The Flying Spur's interior has all the luxury you’d expect from a quality brand like this. A full-length acoustic shield fitted beneath the roof reduces annoying road noise, making this one of the world's quietest cars when driving at motorway speeds. All four seats give you and your passengers plenty of space, and the Flying Spur's upmarket personality continues with plenty of leather and wood detailing throughout. There are myriad interior trim combinations, with exclusive colour schemes reserved for the W12 S.

The Black Edition was new to the range in July 2017. Based on the V8 S trim, it forgoes the usual chrome trim in favour of black gloss feature strips, door mirror casings and window surrounds, while dark tinted lights and special 21-inch gloss black wheels provide an aggressive yet understated look. The interior features richly upholstered leather seats, colour-coded to a contrasting headliner bow, while the dashboard sports piano black wood veneer.

The Flying Spur Mulliner model offers even more luxury. Equipment such as 21-inch alloy wheels, chrome detailing, diamond-quilted seats and other high-class extras separate this version from the standard model. Additional features for the V8 S follow those introduced for the W12 S. Both S models have gloss-black treatments on their window frames and door handle inserts, there’s an aerodynamic diffuser in gloss-black under the rear bumper and the W12 S is distinguished by its unique front grille. Both versions enjoy an interior headlining with contrasting colours and materials that lift the interior ambience.

Room in the back is great and there's a big boot, too

There's plenty of room to carry all your luggage in the big 475-litre boot, but even a BMW 3 Series beats the Bentley Continental Flying Spur with its greater 480-litre luggage capacity.

Power sockets allow you to charge your electrical devices on the move, while a rear touchscreen lets back-seat passengers control the satellite navigation, climate control and more. There are also washer jets that clean the car's lights if they're dirty, as well as a tyre-pressure monitoring system.

Many of the Flying Spur's parts have been used across the Bentley range, so any initial faults should have been eliminated by now. Electronic stability control, anti-lock brakes that prevent the wheels from skidding and ISOFIX mounting points for child seats are all standard. Unfortunately, there's no Euro NCAP rating for the Flying Spur, however judging by the long list of safety kit, it should perform well in the event of a crash.

Tried-and-tested parts mean this Bentley should be reliable

Many of the Flying Spur's parts have been used across the Bentley range, so any initial faults should have been eliminated by now. Electronic stability control, anti-lock brakes that prevent the wheels from skidding and ISOFIX mounting points for child seats are all standard. Unfortunately, there's no Euro NCAP rating for the Flying Spur, however judging by the long list of safety kit, it should perform well in the event of a crash.

You'd certainly want your money's worth from a car that costs upwards of £136,000 – and the Bentley Continental Flying Spur certainly delivers in this category. There's no denying the Bentley is expensive, but that price tag gets you a top-notch infotainment system, LED headlights, keyless entry, alloy wheels, a sunroof and a boot that opens and closes electronically. A Breitling clock, power rear window blinds, an eight-speaker stereo, parking sensors and DVD players with LCD screens in the rear are also fitted.

Although the V8 is £10,000 cheaper than the W12, it misses out on some of the more expensive model's standard equipment. Adding these as options to the V8 means the difference in price between the two cars is 'only' £3,000 – not much when considered in relation to the total figures. As you'd expect, there's a wide range of alloy-wheel designs and paint colours on offer.

The Bentley options list includes possibilities you might never have imagined until you saw them written down. Bentley offers myriad opportunities for its customers to tailor their cars to match unique – and often outlandish – tastes. The V8 S that we tested had a Mulliner package including diamond-quilted leather seats, sports pedals and a rear seat entertainment system that inflated its price by over £50,000. It therefore seems rather mean-spirited that Bentley can’t see their way to including adaptive cruise control as standard, rather than as a £2,100 optional extra.