The Citroen C3 has tall windows that give you a great view of the road, along with thin pillars either side of the windscreen that have been carefully designed to minimise blind spots at junctions and roundabouts.

It’s also available with a Zenith windscreen, which stretches back over your head to allow more light into the cabin. This comes as standard on higher-range models and is a £300 option elsewhere in the range.

The C3 is 3.9m long, the same length as the Hyundai i20 and slightly shorter than the Renault Clio. It clearly won’t be as easy to park as a city car, but the excellent visibility, light steering and optional rear parking sensors mean you shouldn’t have too many problems.

Inside the Citroen C3, the glovebox is smaller than it looks, as half its space is taken up with a fuse box, but there’s better news elsewhere. The door bins and other cubbyholes around the cabin mean there are plenty of places for your phone, snacks and wallet. The door bins could be a bit bigger, though. 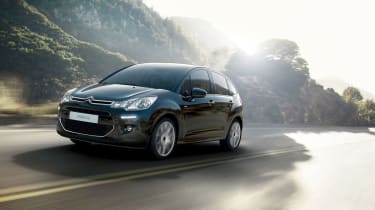 A central front armrest (a £159 option or available as part of an option pack), adds discreet extra storage.

Unlike the three-door DS3, the C3 is only available with five doors, making getting in and out of the back much easier. A relatively tall roof also means rear space is pretty good, with decent headroom for such a small car.

As well as being more comfortable than the Citroen DS3, the C3 is also more practical thanks to its 300-litre boot. This is also larger than you’ll find in a Ford Fiesta (290 litres), Volkswagen Polo (280 litres) and Peugeot 208 (285 litres). In fact, the boot is only 16 litres smaller than what you get in a Ford Focus. But it’s not class leading – that honour goes to the Honda Jazz, which has 379 litres of space behind the rear seats.

The C3 boasts 60:40 split-folding rear seats as standard, with 1,121 litres of freed up when you drop them down. Unfortunately, they don’t fold completely flat, so large items will need to sit at a slight angle. The boot opening itself is rather narrow, with a high loading lip, so large boxes can be a tight squeeze.